Clockwork Empires version 1.0 has emerged, glistening, from its development-spore and launched on Steam! We are out of Early Access and into the wild frontier that calls for Colonial Bureaucrats to manage bustling colonies and chop down all the trees and maybe start a cult maybe for Progress and Civilization! You can purchase Clockwork Empires through Steam or the Humble Store (which provides a Steam key*) for a 10% discount for the next week!

* We will be setting up non-Steam distribution of Clockwork Empires via the Humble Store and possibly other online distributors in the near future.

The Development Progress Report has been updated with a full annotated changelog for version 55A to version 1.0. We’ll put the full changelog at the end of this post for those interested in seeing what the last month month of Early Access has brought to the game.

This is not, of course, the end of work on Clockwork Empires: We shall be continuing support for game stability and bugfixes, and we have a list of additional content and some small features we’d like to add post-release.

Character skills are now a thing in this game! While I’m certain that we’ll need to iterate on this first version of this system, all middle-class characters – Overseers, Artisans, and so on – now have a concept of how good they are at a number of skills. These are: resource collection, carpentry, smithing, cooking, construction & repair, science, and et cetera. (We can always add anything we forgot later). Performing tasks associated with these skills will eventually cause a character to improve their skill in that area (and the skill of those working under them), and that improvement in skill, for now, controls how quickly a given job can be completed. Maximizing a character’s rank in a particular skill will currently take a whole lot of time, but hopefully the drastic amount it improves the rate at which they can perform work is worth it. We’ll be keeping an eye on tuning these. 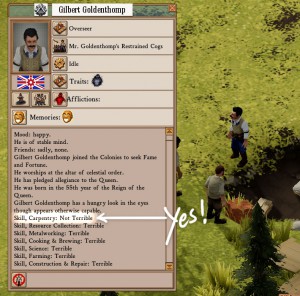 We shall all aspire to one day become “not terrible” at carpentry. (And don’t mind the UI here, it’s just really easy to prototype with basic text output.)

We’ve known from the start that we wanted to include some kind of character skill progression, but there were some design hurdles to overcome before implementation. First is that we want to keep the “cast of characters” the player must pay attention to small, because it’s easier to care about the minutiae and relationships among a dozen people than it is to sort out anyone in a crowd of fifty or a hundred characters. So for now we’ve restricted the character skills exclusively to the middle class “cast”. Besides, this is the (sorta) Victorian era – overseers are not particularly interested in how the common laborers think they can do their job better. As such, lower class characters will directly reference their overseer’s skill level when determining skill modifier. (We’ll likely be secretly tracking the lower class characters’ skills  for other reasons, but they will only be able to perform a task as fast as their boss allows it.)

Posted in Clockwork Empires | Tagged bo hunting skills, computer hacking skills, do not put remaining arm into power saw, hearts of iron will be followed up by legs of wood and finally pieces of string, if you want accurate depictions of the Victorian era go bother paradox or something as we are not that kind of studio, is dynamite skill a skill, nunchuk skills, the sorta-Victorian era ruled by Queen Victorish the Somethingth, we may stumble into correctly modeling woodpulp as being a chief component in cheap sausage, we will also be merging the carpentry workshop with the kitchen, we will elude our unspeakable fates by making a giant effigy in wood, wow something messed up the center tag there didn't it, your not terrible carpentry will not save you from cosmic horror mr. goldenthomp
8 Comments