A Fishperson raider driven to violence by the plundering of their young for food rushes from the fog to beat a colonist with a coral club. Their fellow Fishperson-raider, a few steps behind, fires a spikegun with a ‘pop’. The terrified colonist falls over dead. The Fishperson with the club pauses at this, then turns and runs from the corpse in horror, back into the fog.

I didn’t anticipate this, though I wrote the script that made it happen: Seeing the corpse they created by killing the colonist pushed the Fishperson over the morale threshold that flips a switch that makes the fleeing behaviour much more likely. I had thought to simply have Fishpeople become demoralized by seeing other dead fellow-Fishpeople, but it was triggered by any humanoid corpse at all. A small mistake, but a really cool effect because it implies that these Fishpeople are not merely “the goblins of Clockwork Empires” but people of a sort that may, in their way, sympathize with your colonists. — Just so, sympathy is the goal of the latest efforts to increase the complexity of Fishpeople to start becoming more than ‘enemies’. Once enough features are fleshed out enough, perhaps they can become friends, albeit creepy fishy friends with some funny ideas about how things work and a penchant for inducting their land-based friends into the ways of The Deeps.

(One doesn’t imagine the Empire being enthusiastic about developing Fishpeople friendship, of course. But that’s why you’re the Colonial Bureaucrat and they’re the far-off Empire, right, power and responsibility of delegation and all that and come-what-may, isn’t it?)

The goal is sympathy; we want you to consider their feelings. They’re individuals as much as your colonists. Slaughter if you will (and that’s where the game pushes you right now due to lack of other combat challenges), but we’re starting to provide some more serious structure and consequences for combat — for your soldiers who are carrying out the violence in particular. In Clockwork Empires, doing violence and witnessing violence takes a psychological toll; it creates memories, and a soldiers will create memories with different interpretations of the events they witnessed based on their personality traits. 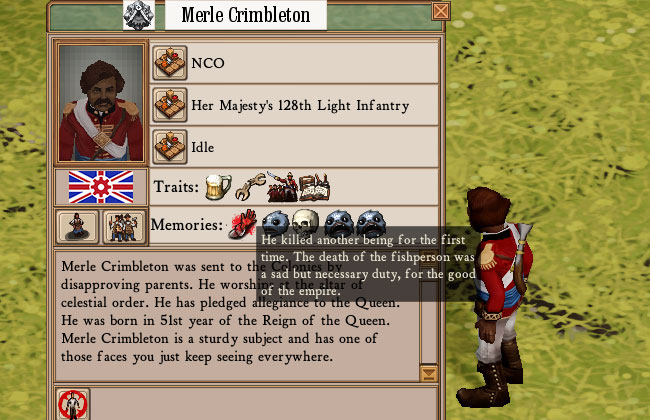 Some characters wouldn’t feel as bad about killing Fishpeople as Merle Crimbleton does. (And considering he’s a “drunkard” I suspect he’ll be hitting the drink after this.)

A brutish xenophobe will happily gun down Fishpeople all day – though what will that make them eventually remains to be seen – while a more poetical, mild-mannered type who happens to be a soldier will have some second thoughts. Killing for the first time is more upsetting than the second. Killing a human is more upsetting than killing a fishperson (unless one is, as they say, a bit fishy).

The effects of consequences rippling out from actions to create more consequences is what Clockwork Empires is all about and as we dig deeper we’re enabling this to happen more and more.

We’ve put a new update into the experimental branch on Steam. You may opt-in if you dare. Changelog as follows:

If you’ve opted in to the experimental build, let us know how it’s going!