WARNING: This is a technical graphics rendering post! If you are not interested in the nitty gritty of OpenGL performance optimization and what I did this week, then what you should know is “Hey, we’re making the game faster!” and “Well, you should probably update your drivers if you haven’t done so already.” The fact of the matter is that this is a blog post that will be most interesting to people with an interest in graphics programming, but this is a game development blog after all, and this is game development!

(We’ve left a whacky animated gif at the bottom of this post as a reward for making it all the way through. No cheating! -ed.) 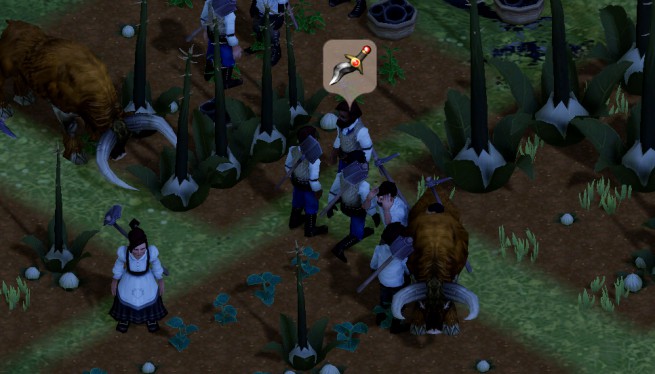 In unrelated news, you shouldn’t let cultists run your farm.

One of the things that has been talked about recently in the graphics programming community is the problem of driver overhead. Every time a graphics programmer makes a drawing call to the video card, the driver sits in between your game and the video card and looks at everything the game sends it. It checks to make sure you didn’t feed it garbage and that everything is valid, so that you don’t end up crashing the computer in a fiery blaze of glory or a blue screen of death. These validations add up and take time – every time you switch states, every time you change textures, and every time you draw something, the little man in the driver needs to go through and sort it out. This takes time, and slows the game down.

In the build of Clockwork Empires which is currently on Steam (30B), we spend about 30 msec/frame doing rendering. Most of that time is spent on the CPU, either setting up state, culling things, and generally doing busywork.

There are a number of traditional ways to try to make this better – geometry instancing, which is something I have been planning on implementing forever, is one of them. In geometry instancing, rather than drawing one cabbage, we draw a hundred cabbages all with one draw call. We batch up all the cabbage positions when we draw cabbage, and do it all at once. If we draw 100 cabbages, we save ourselves 99 trips to the driver. The problem, however, is when you have 15 logs, 12 pipes, 37 planks, 12 crates of beer, 14 fish people heads, 18 trees… what do you do then? Well, ideally, you’d like to draw it all at once.

Recent initiatives like AMD’s Mantle library, Apple’s Metal library, and DirectX 12 have tried to fix this by providing methods that reduce the amount of driver between the user and the video card – for lack of a better word. None of this is helpful to us, because we use OpenGL. The people looking at how OpenGL handles this problem – a consortium of half-crazed developers from various IHVs such as AMD and NVIDIA – proposed a solution called Almost-Zero Driver Overhead (AZDO), which postulates “Hey, we don’t actually need to do anything to fix this problem; really, all we need to do is to be creative with some of the extensions we already have.” Their solution:

What is not mentioned in any of the technology documentation provided by the IHV is how to actually structure this to make it work without driving yourself around the bend. Clockwork Empires already has a renderer that operates in two parts – a frontend, and a backend. The frontend does things like “update all the animations” and “walk the scene, figuring out what’s visible and what’s not visible, and put all the visible stuff in a list of things to draw.” Any visible thing (static model, skeletal model, rigid body model, particle system, landscape chunk, ground polygon, etc.) just dumps a big bunch of “polygon soup, shader, texture, rendering state flags” to the backend. The backend then sorts the pile of soup/shader/texture/flags in order to reduce the number of driver calls it has to make anyway, and fires it off at the driver.

The first trick to moving to an AZDO renderer is to work incrementally. In my case, I worked in the following order: get everything in the big array, get it using the right function, then get the texture arrays working. Thankfully the actual extension that does the work (glMultiDrawIndirectARB) is based on three other extensions, and keeps wrapping functionality from other extensions up in bigger, more efficient functions with less draw calls. Each of these previous extensions corresponds to “the next level of AZDO”, and so you can figure out what goes wrong one step at a time rather than trying to shoot for making everything efficient as quickly as possible: first put all your vertices and indices in one giant array and access it normally; then, use normal instancing to draw everything in it; then use the big fancy dispatch function. We then do the same for texture arrays. 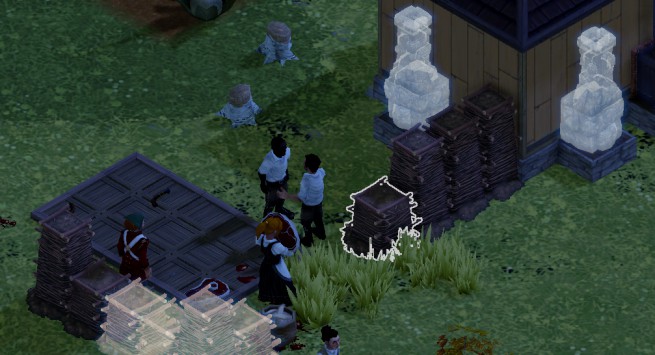 This’ll keep those fishpeople out of my cabbage!

Some warning notes and general musings for developers:

The current speed issues in the codebase on the renderer are now caused by two things: poor quadtree performance (in particular, cache misses) and a very slow function called when clicking and dragging selection boxes. Both of these can and will be fixed. I’ve also fixed a bunch of crash bugs caused with graveyards, and with dropping a shovel infinitely, over and over again. Stuff will be put into the experimental tree as soon as it is stable which will hopefully be before I take off for PAX Friday morning.

Posted in Clockwork Empires | Tagged bringing gabions back in style, Doctor Cogwhizzler's fantastical whizzling patented OpenGL drivers, For this post we're just going to go ahead and hope you're a big fan of OpenGL talk, glWhizzleArray4i, how not to use a shovel and more OpenGL tips, it was determined today that bumblebees are "very cute", it was determined yesterday that a cog which spins uselessly can be said to "whizzle", loose lips sink the game engine, murderfarm, opengl talk is the best talk and full of lip jiving sassafrass
8 Comments