And in the darkness bind them: The Event Director

The scripting capacity of Clockwork Empires is a funny thing. It gives us immense power, the ability to do amazing things. But it’s very easy to get lost in a mess of complexity. So, yes, we can script an event that essentially holds in itself an entire Twine-like narrative dialog sequence that pushes commands to the game world simulation, waits, then reads states from the game world simulation and thereby lets you interact with the world in abounding narrative scintillation.

But be warned: you may lose yourself in this power, and give in, and be plagued forever by spectral script errors.

So, back that up: We’ve got events. Some are pretty complex. They can be very complex. To get a handle on this — and to give players a handle on understanding what the heck is going on during the course of complex event chains — we’ve been working on a feature called the Event Director. This has two parts: a back-end that runs an arc of events, and the front-end that displays what’s going on in an arc of events to the player. Let’s see it in action using a mundane event chain which has been revised to operate in this new system:

So you’re being invaded. This is important! And now you get to make some choices along the way.

(Note: All details of this event arc are open to change and this implementation of the UI is absolutely functional. In other words, it’s not perfect, but it works, and we’ll polish it up later.) 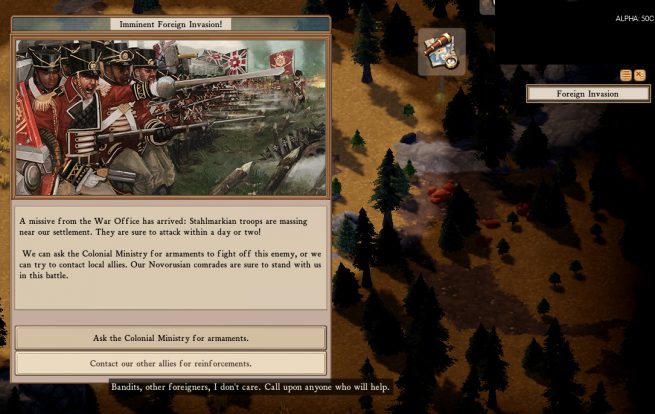 Here’s how we start: we’re informed of the invasion, are presented with a choice (which will execute a default option if you stall long enough), and you may notice a new persistent event arc header over in the alerts notification area on the right. 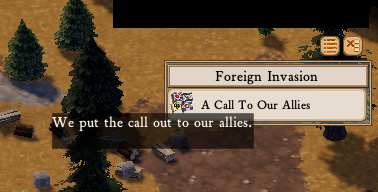 Having made a selection, a stub-style alert has been added to the widget. It’s got a tooltip with whatever additional information we think is important to convey to the player. 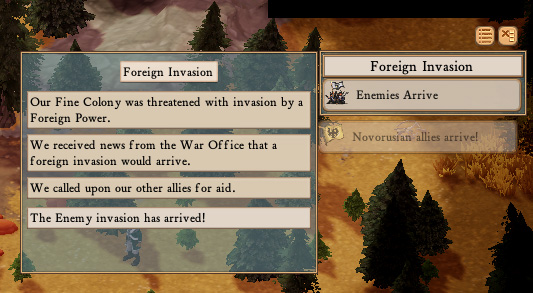 Here we’ve advanced in time a bit. You can see that our Novorusian allies have arrived (though their alert should properly be in the Foreign Invasion box – we specify a parent widget, if any is desired). My mouse cursor is hovering over the “Foreign Invasion” header which gives an expanded mini-history of what’s going on in the event arc. The newest entry in this log appears at the bottom and is highlighted. 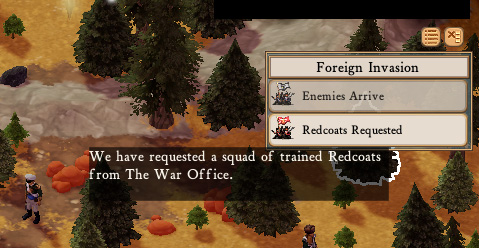 In this event arc, you get a second choice as well. Here you can see that I’ve asked for a squad of temporary Redcoats as reinforcements.

The enemy is spotted, the Redcoats arrive. And they’ve already killed one of my Novorusian allies.

Yeah, this isn’t going well. You can see all the alerts piling up there, and fading while they time out. 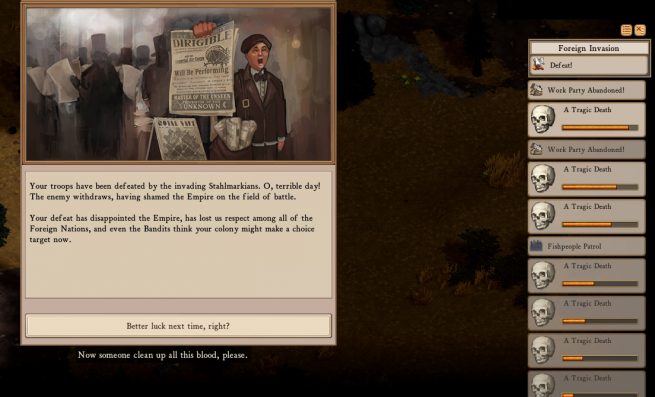 Bloody Stahlmarkians right? You can see that I have a “Defeat!” stub-alert under Foreign Invasion there. So I am notified of the results of my failure, and life goes on. Well, for the few survivors.

This may have gone better had I actually had any troops. Or made more friends with various factions. Or requested different options during the course of the event arc. But that’s all the fun of it!

Now, this won’t just be limited to the much-beloved Foreign Invasion event arc. Our primary goal for using event arcs is to power ongoing Eldritch happenings. But if I told you anything about those, that’d be ruining the Fun, wouldn’t it? 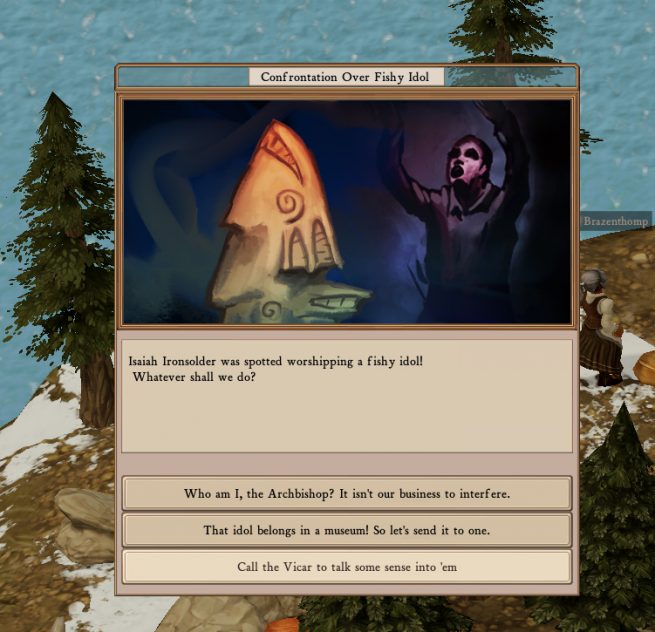 Okay, here’s a peek. You may notice here that options may open up depending on the facilities you have available in your colony. This will become much more important for providing Special Options to deal with the Various Troubles that may arise.

More on that – much more – will be made available to explore in forthcoming updates.

Posted in Clockwork Empires | Tagged #justvicarthings, Das Großherzogtum von Stahlmark, idolatry, next patch fixes nothing but vicar related problems, we made another game that creates terrible problems for museums, we were caught worshipping King of Dragon Pass - a vicar was sent to talk some sense into us
3 Comments

3 Responses to “And in the darkness bind them: The Event Director”