Do you see it, right there? That’s the problem. Herein it shall be explained why and then how it is solved. 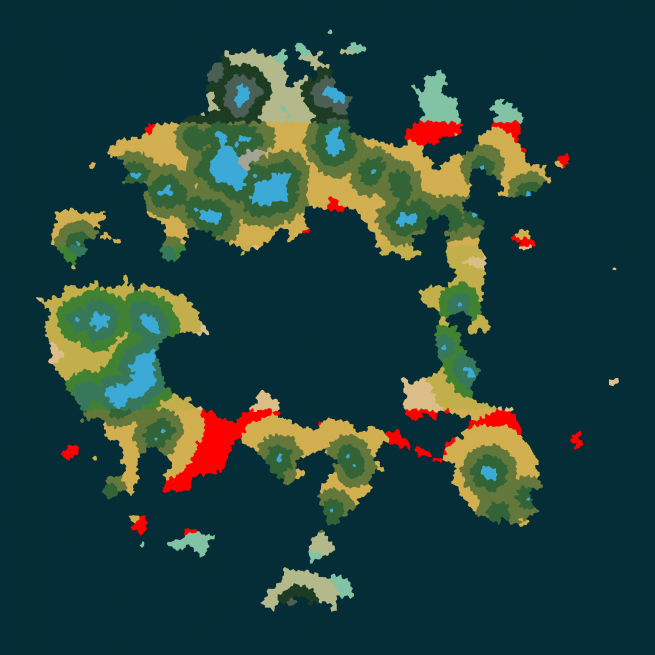 So we’ve had some talk about the overworld lately and the old post about world map generation still stands. Now we’re dealing with the details of living in it, of filling each biome with appropriate textures and objects. This is proceeding rapidly.

So what’s that red stuff? It’s nothing. In other words, it is a part of the map for which there is no applicable biome. The map tracks moisture and temperature (among other things) on a scale of 0 to 8. We can create a two axis chart of this and draw rectangles that describe the range of conditions in which a biome will appear. In the real world, this results in those fascinating charts I’m sure you’ve seen, for example down a bit on the wikipedia page for biomes – direct image link here.

In the midst of altering biome temperature/moisture settings I found a lot of red stuff appearing and decided that, okay, we need to chart out what the heck is going on here in my working copy of the biome definitions. The result was this: 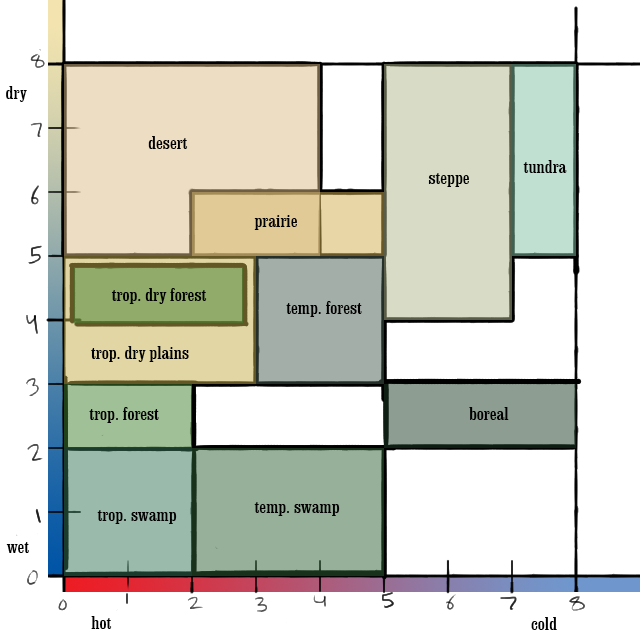 See those gaps? They turn red on the map generator. (And overlaps! Jeez.) This made it clear that all of these numbers needed some adjustment, so: 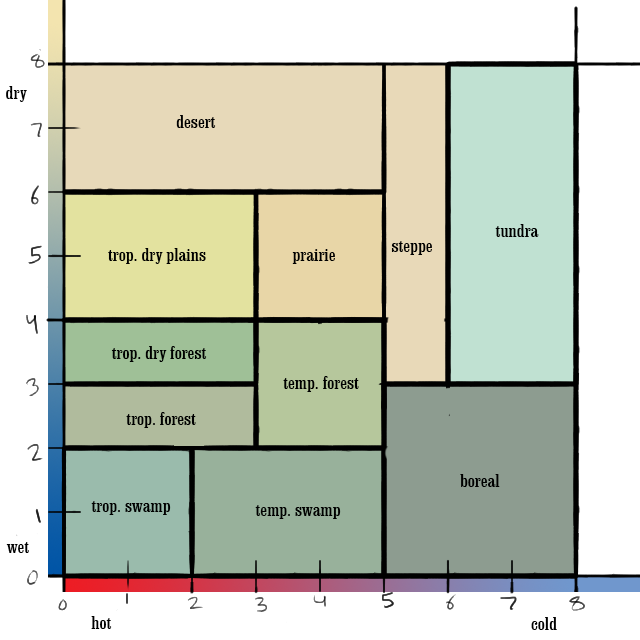 Much more sensible! (I went and adjusted some of the colours too.) 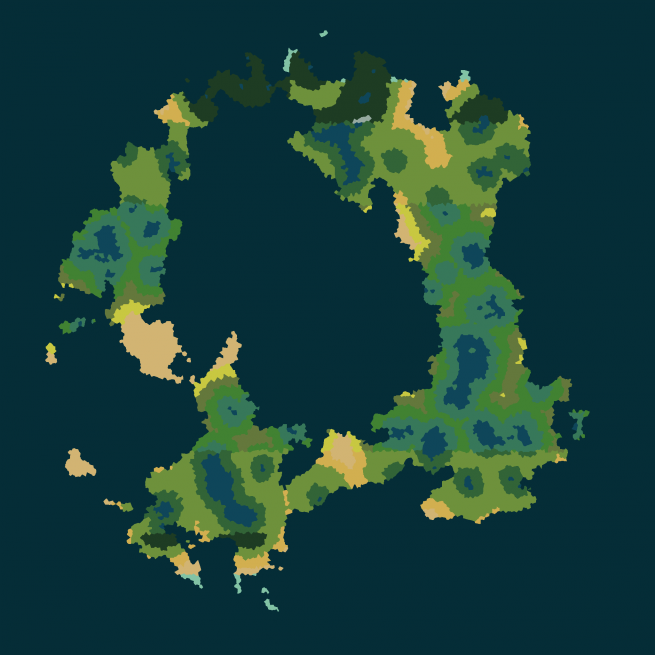 Which has no red, no gaps in reality, no problems! … well, plenty of problems, but you’ll see those later.

Just as an excuse to drop in some screenshots, there was a related problem on a smaller scale which looked a little something like this: 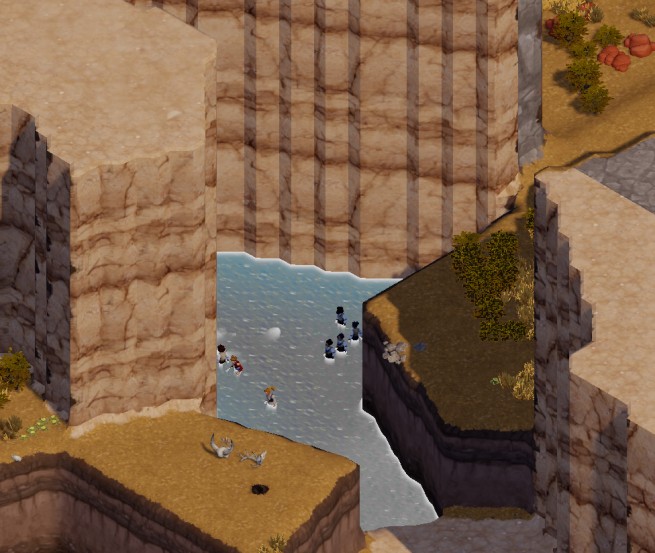 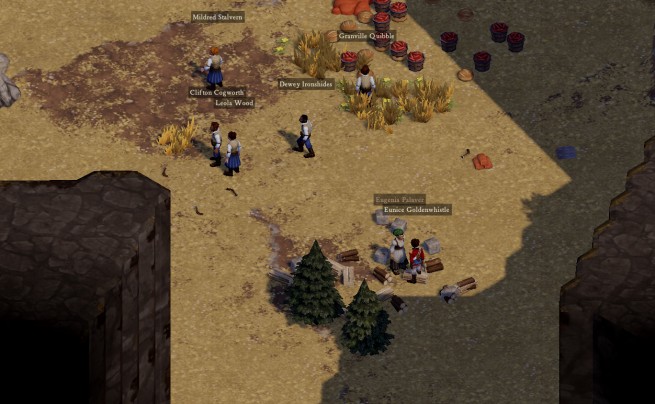 Dramatic, yes, but actually terrible. This was not a missing biome, but a missing sub-biome. This is the collection of data which defines what appears in-game on-map. Every biome has a collection of sub-biomes. Savanna (uh, “tropical dry plains” in the charts above), for example has sub-biomes called “savanna grassland”, “savanna forest”, and “savanna watering hole” which are used in various proportions to fill in any bits on the game map that are considered savanna.

So in the mountains of madness examples above, there was a typo so the sub-biome wasn’t found. This caused the map generator to default to setting any area of that sub-biome to be made up of rock at the max map height. Easy fix!

Here are a couple shots of new biomes that are coming along: 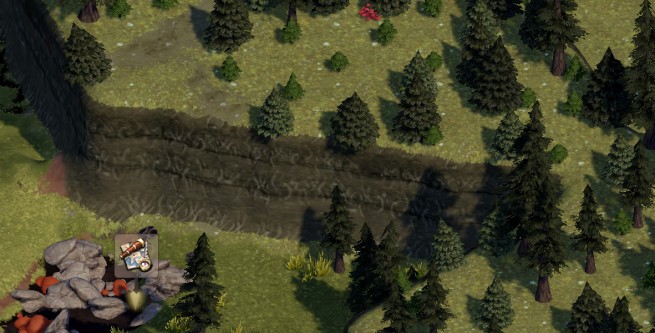 The lesson? It doesn’t hurt to chart your data.

(And I think you’re going to enjoy all the new biomes to explore.)

10 Responses to “What’s That Red Stuff?”