So You Want To Form A Cult

We’ve been a bit coy about portrayal of cults in Clockwork Empires because we’ve wanted to keep them mysterious. Don’t show the monster. But if a cult forms in the woods and no one bothers to really tell the player what’s going on, did it matter? Perhaps not. 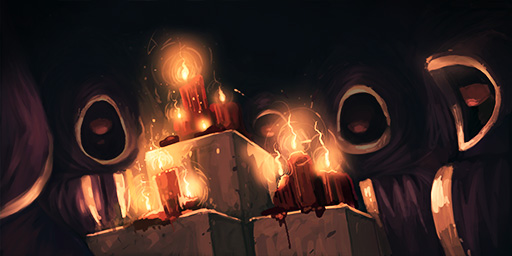 Aside from that, the mechanics we built made it in the player’s best interest to instantly execute anyone they suspect of forming a cult, which happens when you give people any kind of free time. Which is kinda interesting in a brutal way, but if another day of executions is the only valid response to cults, then is this not simply eldritch whackamole?

So we sat back and asked ourselves: Where do we want to go with cults? What player choice should they involve – why would a player want to keep a cult around (aside from morbid curiosity which, granted, our players seem to have in abundance)? How much do we tell the player and how much do we keep as a Fun Surprise?

Cults should form for a reason. Some supernatural experience will plant a seed in the head of a colonist. Given certain traits and a touch of madness, that seed will take root. Sometimes literally. A colonist will struggle with their maddening visions until they either suppress them or embrace them. Upon embracing them, the colonist starts to think it’s a good idea to invite others into these visions – and that’s where it begins.

(I should mention, we gave Madness an overhaul. It’s no longer an emotion alongside happy/sad/etc. but rather a value to show just how much experience a character has had with Things Beyond Science, Reason, and Sanity. The more supernatural experiences a character has, the more likely they are to crack and advance a level down the madness track, which opens up new … possibilities. Booze, of course, will enhance resistance to these supernatural effects and certain potent curatives may even lower Madness.)

Giving the player a more omniscient view into what cults were up to was instantly more interesting than hiding it. This includes not only the minutiae of character actions and emotions, but also just writing out what’s going on to the text ticker. See here: 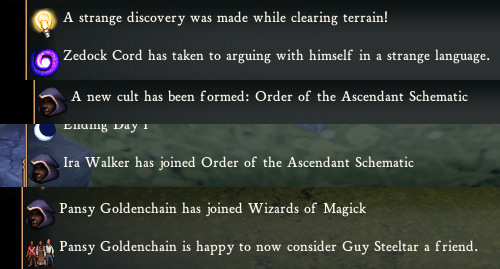 Instantly there is a sense of compounding cause and effect, of events and consequences and potential conflict and loyalties being formed. The risk of course is to have all of this going on without the ability for the player to intervene — the above shots are the sped-up in-development versions where everything is a bit supercharged. We must be mindful throughout to signal clearly to the player what is going on and in many cases say straight out what sort of actions they can take to deal with The Cult Problem.

And we’re really trying to avoid having quite so many summary executions. So:

What possible advantage could having a cult around have?

Easy: people in cults are irrationally happy. They’re treated like garbage by their leader, have to all wear the same shoes, and are generally forced to live in squalid communal bunks. And yet they act really, creepily happy. This is key!

The Frontier sucks. The food is bad, the housing is bad, and your colonists are probably going to lose friends to one thing or another. Making good houses, good food, and ensuring safety is expensive and takes lots of bureaucratic effort — allowing cults to keep your people in line may well opiate your masses to their suffering so long as  you’re willing to risk a little erratic behaviour and the possibility of offending the Church a little bit.

We discussed Character Events last week. The system for interacting with cults, of setting policy of tolerance or persecution toward these “new religions”, builds upon the exact same framework with the distinction of targeting collections of characters rather than individuals. But it’s easy and it’s all right there!

There may be other, more eldritch “benefits” to fostering powerful cults, but the Empire frowns upon discussing such topics so we shan’t say a word more. 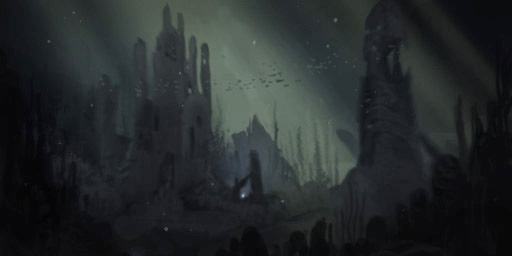 What a lovely lost underwater city! Pity it’s all I can dream about anymore.

Posted in Clockwork Empires, Game Design | Tagged apparently Dark Ritual was op and imba, David Baumgart has taken to arguing with himself in a strange language., It's all about the execution, Join the Colonies Today!, real opium is a valid means to opiating the masses as well, Talking about the cult is less like showing the monster and more like the creepy old guy at the start of the episode of Scooby Doo, Third rule of cult club is bring snacks, why are cultists so happy all the time?
13 Comments

13 Responses to “So You Want To Form A Cult”