I believe it was Rock Paper Shotgun who referred to our previous game, Dungeons of Dredmor, as “a randomly generated spinning roulette wheel of glory and death” (or something like that, anyhow.) Regardless, this is a good design philosophy and one that we can all agree upon. To this end, it is good to put some random events in games – they sparkle things up.

We also have said that one of the key driving forces in Clockwork Empires is your characters; it is very good for them to do various things, based on their personality, character traits, and moods. We want characters – and who they associate with, and who they are organized with – to start making a noticeable impact on the game beyond the incidental impact of being nearby other characters when they do something that may, or may not, affect other members of your settlement.

Dwarf Fortress handles this with Strange Moods; a Dwarf will lock themselves in a room and go insane – or, maybe, produce a strange artifact. Crusader Kings 2 handles this with various events happening, ranging from jousting tournaments to attempting to turn lead into gold.

To generalize this: we have random Character Events. 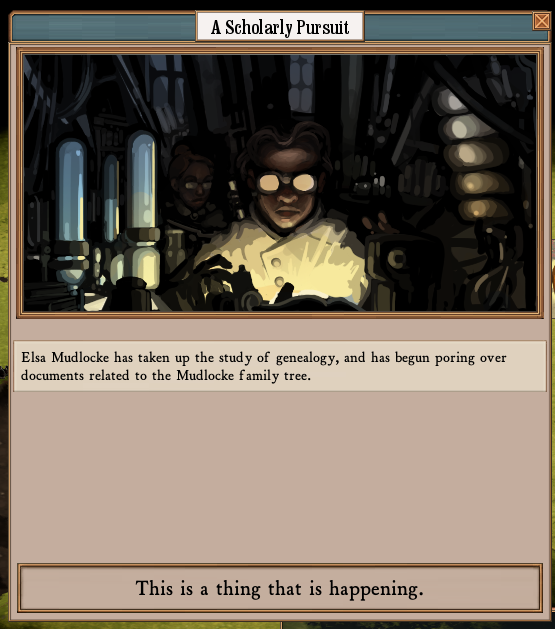 The current design philosophy with Character Events going forward is that either a) you should have a choice, and both choices should be interesting and with both pros and cons; or b) you should get an interesting random outcome. For instance, receiving Suspicious Goods presents you with a choice: gain some much-needed supplies, while encouraging Criminal Behaviour in the colony (and, you know, angering people who are moral and upright citizens); not receiving Suspicious Goods will make the ordinary folks of the Colony confident and happy that the Empire is the same as it has always been, but Criminals will no doubt be upset that their favors was rebuked! The drama! (In their rough-and-tumble way, they’re only trying to do what’s best for the colony, you know…) 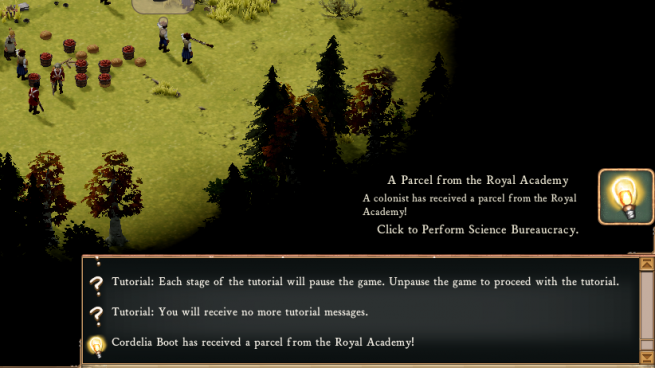 Nope, nothing ominous to see here.

When a character event occurs, it will give you a choice to consider, or a random roll of some kind; depending on the outcome of the event, the characters that it affects will, in turn, drive the simulation. Ms. Mudlocke, for instance, will start rummaging through the Colony’s Bookshelves and start talking to people about genealogy, hoping to discover something quaint and fascinating about themselves. That… is one way of describing what she will find, yes… (Or maybe she just discovers that Zebulon Crimble is her distant cousin! Too bad he’s about to be shot for Enthusiasm.) 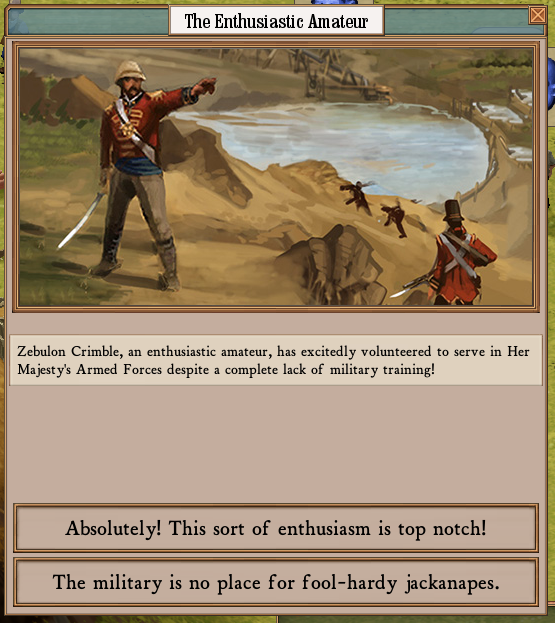 Mr. Zebulon Crimble is probably about to get shot while exclaiming “It’s all rather exciting!”

Because this is all configurable via our XML-and-Lua requirements system, we can have a job that requires two people with specific traits. For instance, we can require two characters that are both communists, or “a character with the strange mood and an eldritch artifact”.

Having random events also provides opportunities for finding out a little bit more about the backstory of the Clockwork Empires. (Who is this Royal Academy? Why do they keep sending dangerous parcels? Do we ever actually get to meet Lord Palmerstoke?) We will be populating the game with some character events for Revision 36, and will add more moving forward throughout Early Access. 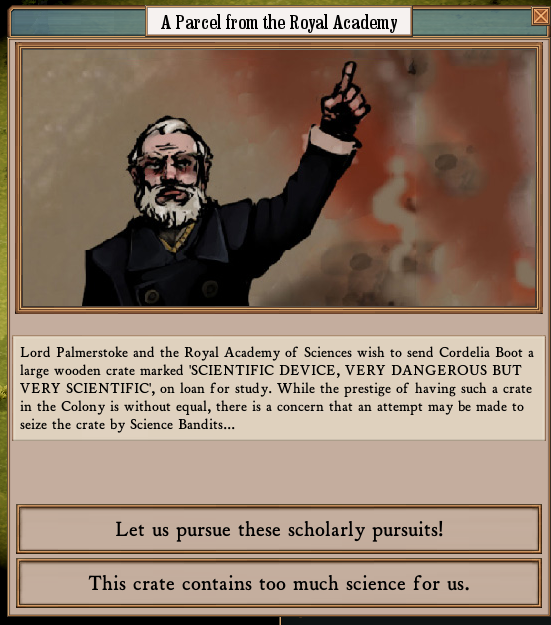 Posted in Clockwork Empires | Tagged does lord palmerstoke even exist, genealogy should always be dangerous, genealogy should always include vacuum tubes and... what appears to be some sort of large metal coil, it is generally important to wear safety goggles when researching your family tree, later on zebulon crimble was heard to be performing enthusiastic science despite not having any idea what he was doing, let us pursue these scholarly pursuits!, please send coffee as we are very low, Press X for Scandal, the Royal Academy of Science labels their parcels in a very precise manner
6 Comments