It is time once more for the monthly update to Clockwork Empires! We are now at v33, or as we like to call it, Bandit Attack On ‘Fightin’ Vicar Zedock Woodburn’s Frontier Chapel. 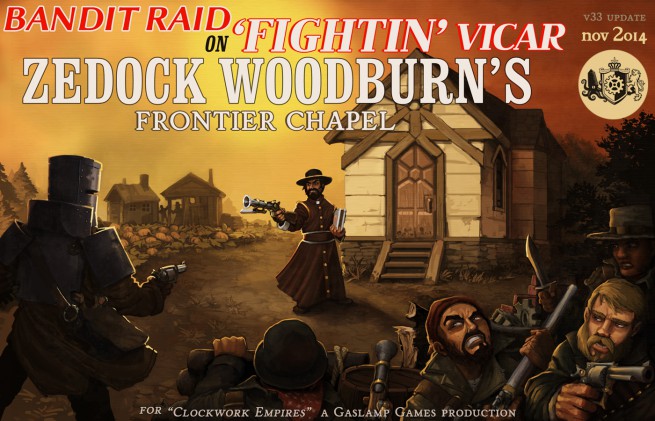 Important note: the Clockwork Empires renderer got a huge overhaul. We encourage you to update your video drivers for Queen & Country.

OS X users: We thought we had it, but it turns out there’s one outstanding problem owing to having incorrect libraries being loaded – somewhere – for Lua. We’re still tracking this down, and will have this out as soon as we can.

Linux Users: We are still working on Linux support, which (as always) is waiting on us to fix a million references in the code base to case-sensitive filenames, as well as setting up the build machine to correctly dispatch Linux builds of the game (which have to be built with a special, hacked-together compiler) to Steam. Your patience continues to be appreciated.

Posted in Clockwork Empires | Tagged adorable foxes are sort of like bandits but they just steal your meat by eating it, an intricate series of blame assignment, bandits are australia's most dangerous animal, going to keep pushing the length of these update names and see if media actually publishes the whole thing in a headline, opengl is literally causing blood to come out of my eyesocket, running into integer limit keeping us from setting snubbing utility appropriately high, the vengeful ghost of steve jobs continues to haunt the office for making fun of him in the dungeons of dredmor expansion pack system requirements, this update dedicated to the memory of Ned Kelly, we learned everything we need to know about religion from Dominions 4, with the totally imba buff to Lingon & Saskatoon the meta will be all berry rush to vicars. Aristocrats + mines were already 2 weak, yes I stole that tag from Dienes - sorry!, zedock woodburn just wanted a humble life and to leave the empire's terrifying prize-fighting vicar circuit
13 Comments