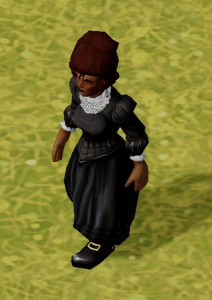 Aristocrats love telling people what to do (even if they’re not listening).

Dwarf Fortress adds additional interest to this suite of mechanics through the peculiarities of its character simulation. So for example a noble who is especially fond of bismuth bronze will really, really want a throne made of bismuth bronze. Armok help you if you don’t have the resources necessary to make bismuth bronze because beatings will be distributed until it happens (or an “accident” is arranged). Similarly, Clockwork Empires models character preferences – of a sort – through our traits system. Our test case: the Big Game Hunter trait.

As we all know, certain aristocrats are just mad about hunting. If an Aristocrat with the trait “Big Game Hunter” shows up, they’re going to pick up a gun and hunt animals whether you like it or not as is the prerogative of their Station in Clockworkian society. Better make sure they don’t get killed while hunting off in the woods because that would cause A Scandal which, surely, will mean all sorts of nasty letters getting published in The Empire Times criticizing the Colonial Ministry and thereby reducing your prestige.

(Other traits that seem promising to flesh out for Aristocratic indulgence: “Scholarly”, “Pigeon Fancier”, “Military Training”, “Drunkard”, “Maddened Intellectual”, and “An Inordinate Fondness for Beetles”.)

Two aristocrats take turns snubbing a commoner. Aristocrats will only snub if there is another aristocrat around to notice them doing so.

Mechanically, yes, getting an aristocrat killed will damage your prestige, meaning you have a reduced ability to call in favours and the favours you do call will be more grudgingly granted. This effect will become more pronounced as the prestige system is fleshed out.

Aristocrats don’t take part in the overseer/workcrew system. They don’t do work. (“What, with my hands? That would be so dreadfully common.“) They generally sit around near fine furniture, complain if there isn’t any fine furniture, get involved in cults, and write strongly-worded letters to The Empire Times.

But having aristocrats in your colony will generate prestige. And we want  to expand the mechanics of their behaviour so that given all that expensive infrastructure, they will in fact be able to do useful things (sometimes). If they feel like it. If you supply them with fine homes, fine food, and keep them from wandering off into the woods. You’ll be fine.

So I give you: The Aristocrats.

In other news, we did a lovely podcast on Quarter To Three last week, give it a listen here.

24 Responses to “The Aristocrats”