A Crash Course in Moving A Legacy OpenGL Codebase to Core OpenGL 3.2

I’m actually absconding from the usual subject of these blogposts this week to do technical writing which people might find useful – mainly because a lot of the information on this seems to be scattered all over the Internet. One of the issues with our Mac port of Clockwork Empires which has prevented it from launching when we wanted to is that we discovered – a bit late in our schedule – that we couldn’t fix all of the shader issues on OS X without porting the entire game from what we were using (OpenGL’s “compatibility” mode plus a ton of extensions, dating back to when this codebase was started ages and ages ago) to what is called OpenGL Core 3.2, which is part of the OpenGL Architectural Review Board’s attempt to remove all of the “cruft” that had accumulated in their codebase throughout the years. In the process of doing this, they removed a lot of the nice stuff about OpenGL that makes it a good teaching tool, which is sort of annoying; you can’t just throw together a program any more and get stuff up on the screen, not without doing large quantities of work. Oh well.

On OS X Mavericks, you can only get access to OpenGL features newer than version 2.1 if you create a core OpenGL context; they aren’t even accessible as extensions, which is just flat out weird. OS X’s OpenGL implementation has been charitably described as “a mess” by everybody involved for some time, as the issue seems to be that all the driver engineering teams at Apple are now cranking out OpenGL implementations for your iPhone (and these are quite good), while neglecting the desktop platform. The situation used to be *worse* before Mavericks, if you can believe it. The net result of this is that I had to take a legacy codebase, with numerous pecadilloes, and port it to what is almost, but not quite, a new graphics API.

Your Monday Morning rendering artifacts. (Sign up for our newsletter to see more broken stuff.)

Ugh.The first step to any porting job is to try not to do it all at once, if you have the option. Instead, limp from point A to point B – break down a list of all the things that break moving from compatibility OpenGL to core OpenGL, change them one at a time so you can test them, then – only at the last minute – switch the core OpenGL profile on. I chose to do things in a certain order, which I think makes sense, but YMMV.

First, an inventory of advantages that I had going into this:

So, what did we actually need to fix?

At this point, I thought I’d removed everything from the game that used the old compatibility code, or at least stubbed it out. I turned on the OpenGL core mode, and fired up the game. The UI displayed, but nothing else, which means that the problem is *somewhere* in the deferred renderer. Now time to go through and figure out what we forgot – starting, by dumping all the frame buffer objects out for the deferred renderer.

First discovery: for some reason, blend modes weren’t blending everything in the compatibility mode, but were on the core mode, so things were being rendered with various exciting levels of transparency. I have *no* idea what changed here, but I just removed all alpha blending from the main loop of the deferred renderer (which should have been off anyhow!) and the output of the frame buffer seems okay, but… nope, nothing. 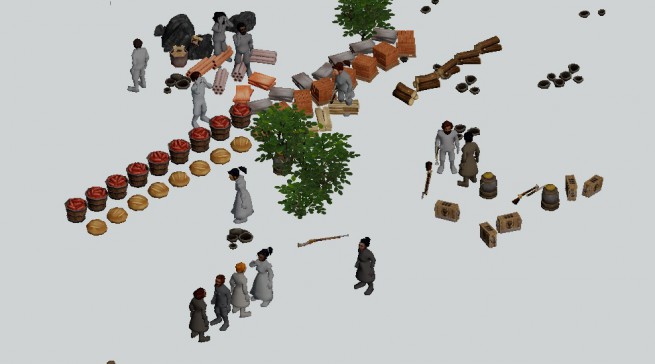 Second discovery: okay, take the entire deferred renderer apart, top to bottom, trying to figure out why it wasn’t rendering and only deferring. Fix shader bugs, nothing. Set the shaders to only do certain things, like “just dump a texture”? Nothing. Swear loudly, drink coffee, google “nothing bloody well draws you @#$@er” and get reminded (thanks to an ancient blogpost by Eric Lengyel) that Core OpenGL 3.2 no longer supports drawing quads. Why? I don’t know. Most hardware usually has specific silicon to set up and draw quads, and it’s definitely something that OpenGL’s professional market would like, where quads are basically excellent. I suspect it’s due to something in the geometry shader that is making it unhappy. Once this was done, though, we ended up in business – the game draws on Core OpenGL 3.2, albeit with a few small graphical errors caused by typoes, things not set correctly in shaders, and so forth.

The last step is just fixing small stuff, and then making sure we actually get the correct function pointers to all of our functions on OS X, and then hopefully we’re in business. Right now Micah is busy removing “ARB” from a bunch of extension requests, as when Apple says “Core OpenGL” they mean business and won’t even pass you anything if you dare to ask for an extension.

I hope this is useful to my fellow OpenGL people out there. For the rest of you – we’ll be back to our usual blogging about occult stabbings and fishpeople next week.

Posted in Clockwork Empires | Tagged everything is fine in kremlin, foul sorcery, I rather like the faux-woodgrain world rendering- it reminds me of my grandma's kitchen table, I want to keep editing this post forever because the alternative is going back to filing paperwork send help please, Jodorowski's Clockwork Empires, new monster ideas from rendering errors so far: two, Nicholas needs more death gems to complete the summoning, programming news that nobody is interested in, street cred, The OpenGL review board is like the illuminati but more bearded, The vengeful ghost of Steve Jobs has his revenge on Nicholas for making all those jokes in the Dredmor system requirements page on Steam, today's cult is OpenGL, wrong geometries, yet another post about wizard politics
9 Comments

9 Responses to “A Crash Course in Moving A Legacy OpenGL Codebase to Core OpenGL 3.2”

Leave a Reply to Ancurio { cancel }