Clockwork Empires is an exceedingly complex game. Each new system interacts with each existing system in ways we necessarily can’t predict. And unpredictable consequences are, to some degree, the goal of any sandbox game worth its cabbage. But there are failure states where the whole web of systems kinda slumps over to one side, repeating the same beeping noise. This isn’t interesting, so we have to poke and nudge the game back to where it does interesting things again. This is called “Game Design”.

Is that metaphor getting awkward? Let’s get to the specific example I had in mind: balancing food & farming gameplay in Clockwork Empires. This is going to go into Exciting exhaustive detail!

Farming, step one: kill anything that isn’t human.

(By the way, we’re doing the big monthly update of Clockwork Empires next week! The Development Progress page will be updated at that time. Details to be released soon.)

As discussed in the  “Ripe for Harvest! (And the CE Rev30 Update)” blog post, I’ve taken over the farming system in the last month and rolled in additional complexity. The process for farming as stated in the previous blog post was to be this:

And that worked. Plus some Fun stuff for Fun reasons.

Then one day, I walk into the coder room and hear something about how farming is really hard and everyone starves: The crops turn to weeds, and though food is ordered cooked, the starving colonists will eat the raw food rather than waiting for the food to be cooked into far more nutritious food. This leads to a downward spiral of starvation as the player’s colonists get stuck in a cycle of growing and consuming low-efficiency food with no chance to escape. Then someone starts a cult, etc.

Why is this happening? The first thought one has, a defensive and uncharitable thought, is this:

This is an easy fallback and taken alone is unnecessarily dismissive of the player’s experience. On the one hand, games can be hard, it’s okay! On the other, you must ask why is the game hard? What skill is being demanded of the player? Does the game tell the player what that skill is and how they can evaluate the information they’re provided to be able to make decisions about how to employ that skill? Are they even given a chance to learn it in the first place?

From another angle: Q. Why am *I* not having any trouble with the farming system? A. Because I wrote it and know all the numbers and the optimal balance of farmers to fields. I know what features are broken and so avoid them. I know the failure states and the exact mechanics that cause failures and even the numbers behind those mechanics so I can time things perfectly and allocate work crews and resources exactly as needed.

But the player doesn’t have any of that. So it seems that the player isn’t getting important information; the player is not even being given a chance to learn how they should play, they can’t learn the mechanics and the failure states without the complete failure of getting dumped into a downward starvation cycle that’s “game over”, no lesson taught. 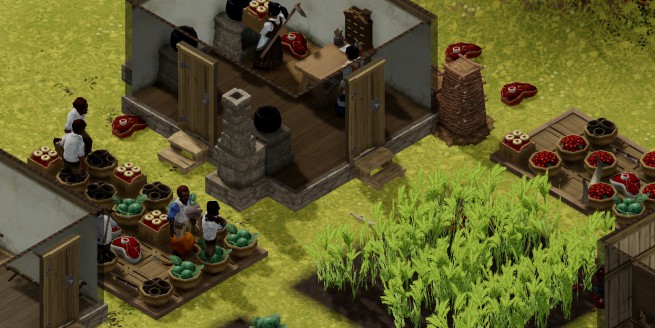 This is also an unfinished game, so two additional points need stating:

So we need to provide more information about what the system is doing, more breathing room to learn and use that information, the means to control the system, and ensure the system is working as intended. I inquired with other Gaslampers about their ideas and threw in a bunch myself that seemed worthwhile for addressing these problems. I’ll go over all of them, organized by how they’re trying to solve the core problems identified above, then state if they’re done or not and why, then break down the thought process behind each and what additional issues were revealed.

(This gets complex as we dig in, so hold on.) 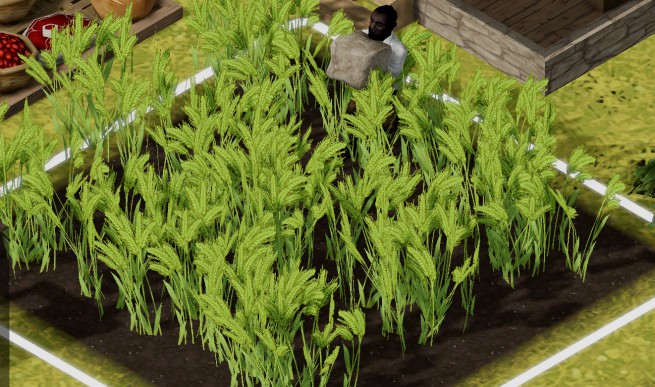 Step 3: Carefully place the stone block in the field. CAREFULLY.

A. Ways of giving the player more information:

(Not mentioned here: a notion to give zones, of which farm plots are a subtype, an informative UI element like Workshops currently have. Would also give more control possibilities, but more on that in a bit.)

B. Easing the player into the system

(But there’s a far deeper problem contained in point 3: any job to be done on a farm plot is collected in a unique “Assignment”, our game/data structure for a collection of jobs. A work crew can only have one Assignment at a time. If a work crew has the Assignment for one farm plot that trickles jobs to it, they will never leave and work on the farm plot next door that badly needs a lot of tending. This suggests that the way farm plot assignments in general work needs an overhaul – work crews that are farming should be able to join together the Assignments of multiple plots into one big farming job. We’ve had this feature on the books for quite a long time but haven’t done it due to prioritizing game stability, but it seems now that everything else is working we’re going to have to get to it sooner. In the meantime, we can just allow farm plots to be bigger so that a player can farm sustainable with fewer but larger plots.)

Don’t you love it when simple problems become extremely complex problems with the underlying structure of large systems? Me too. Let’s move on.

Presented with a problem – farming and food felt unbalanced – we identified some core problems, came up with ideas to address them, then implemented the easy ones, stuck the crazy ones in a pile in the back, and shoved the hard ones onto the “TODO list of doom” powered by JIRA™ . I’ll note here that many of  the required new/changed major features have already been identified by other problems reported or otherwise anticipated by design discussions and are just waiting their turn for implementation, so it all ties together in a nicely maddening knot of contingencies.

This is how the game gets made.

PS. And due to a tag that got switched, butchering fishpeople wasn’t working for a while. Rest assured, this now works in the current experimental build so if all else fails, just recruit a bunch of militia and provoke a fishperson invasion.

Posted in Clockwork Empires, Game Design | Tagged a most exquisite cabbage simulator, a patch will arrive containing a mysterious changelog - watch for the signs, aspiring to be the world's creepiest cabbage farming simulator, charcoal activated job filters, couldn't we have just made "match the three Diggles" and avoided all this mess?, hey no fishpeople this week what happened, in other news we are selling the company to microsoft for a handful of couch change and a vodka distillery in Utrecht previously owned by Steve Ballmer, it always ends up between two grain silos in the Ukraine, nobody ever made workshops like this, ukranian grain silo optimization simulator is best when you do it one grain at a time
11 Comments