All posts tagged with "my log has a message for you"

My quest for the last several months to improve the visibility of information that players care about through our UI has been a really interesting process. There’s a lot going on under the hood of Clockwork Empires, and we simply didn’t have the tools to show it to you before. But our UI has been getting steadily better at presenting data (and I’ve become less and less terrible at UI design) so I keep getting cool opportunities to show you what you actually want to see when you’re looking at various parts of the game.

At this point I think there’s only one system that we haven’t shown at all but is pretty central to the way the game functions, and we actually had to avoid taking advantage of it because if we couldn’t show it to you, it got confusing. But now we can! And this system is tags.

Every object in the game has a set of tags (attributes, if you will) that are generated when we first create an item, and can change over time as an object interacts with the world. Tags such as “timber” or “food” are straightforward examples. 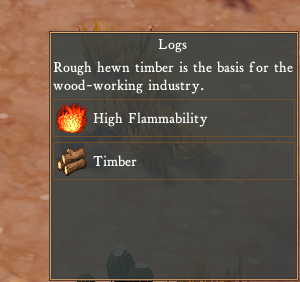 The common log. Flammable, timber, what more could anyone ask for in a log? Perhaps for a message, but only if you’re ready to listen.

Posted in Clockwork Empires | Tagged also somebody added The Larch, Daniel - would you recognize The Larch if you saw it?, hack the planet, my log has a message for you, send us your chairman kaga gifs, still not sure if the flesh cube is a vegetable, what is a blog post? just a miserable pile of tags
7 Comments

When I started working on 1.0.10 at the start of this year, one of the things I asked myself was how to improve our patching process – or how to stop horribly game-breaking patches from happening ever again. First, let us review the Dredmor patch history:

0.9 -> 1.0.0 – The Greatest Crashing Beta Test Ever of 2011.
1.0.0 – Dredmor released with mysterious audio crashing problems, exposed by a change to the audio code at the last minute.
1.0.1 – Fixed the audio crash.
1.0.2 – Fixed the audio crash which was exposed by the fix for the first audio crash.
1.0.3 – Zillions of bugfixes.
1.0.4 – A hastily released patch after 1.0.3 broke save game compatibility with 1.0.2, and the laser-like glare of the Eye of Sauron turned upon me. (And I wept.)
1.0.5 – Was reasonably boring and nothing happened.
1.0.6 – Broke achievements; was hotfixed. (Some people consider this version a “classic” Dredmor for some reason.)
1.0.7 – Humble Bundle build; added Linux support and, also, bonus crashing.
1.0.8 – Diggle Gods build. Included things like “the n-Dimensional Lathe, a giant, crashing, unexploded bomb”, things not giving people the correct stats, crashing mysterious portals, eleventy billion broken tutorials…
1.0.9 – Patch for everything that went wrong with the Diggle Gods build. Added crashing bookcases, crashing savegames, save game corruption, and stuff not loading in the mod launcher. This also marked the start of the attempts at fixing the “belt eating problem.”
1.0.9 REV B – patch for all of these things, some of which actually stayed patch.

One of the conclusions that I reached was that a lot of the really bad problems (save game compatibility; n-dimensional lathe; hideous random audio crashes) were things that showed up when we had a thoroughly tested build, made one small change to it, and then put up the build with that one small change (which, consequently, was the change that broke everything.) As a result, we decided to instigate a new policy: any time we make any change to a Dredmor release candidate, no matter how small, the patch goes out for testing and is banged upon for at least 48 hours (preferably 72) before we ship it. Dredmor 1.0.10 is the first build we’re shipping with this new policy; we hope it works out well for all parties concerned, but it does mean that deadlines are a little hit or miss.

As always, thanks for your patience! We will try to keep the forums updated on where we stand in the QA process. If you want to grab patch RC7 and try it out, OS X and Windows versions are now available in our forums.

What's this? I don't know. Look over there!

Posted in Dungeons of Dredmor, Gaslamp, Programming | Tagged crash what crash, dredmor, my log has a message for you, patch what patch, please think of the diggles, qa
18 Comments