What lies in the heart of a Fishperson?

In the planning meeting last month I was tasked with “adding some creepy stuff”. Lovely, easy! Right?

As is ever the case in a game such as Clockwork Empires, with as many complex systems interacting with as many other complex systems as we have here, it turns out that much of simply “adding some creepy stuff” consists of tracking down the creepy things we’ve previously made then testing and updating them so they play nicely with all the other new things (creepy or otherwise) we’ve made. Plus there are the back-end refactoring passes that have made certain things obsolete, left other threads hanging, and the usual additions of better systems to replace old bits that were a little rougher and/or hacky. So there’s cleaning up to do which not only makes things work better, but makes things work better with other things. This explains how a subtask of my primary directive, “make sure all the eldritch transformations work”, turned into “review all cult-related actions and events” which turned into “overhaul every instance of madness in the game to work with both aforementioned items and with new madness visualization”. Then I found myself fulfilling the contingent requirement of “check every single job in the game and make sure it’s doing what it ought to be doing with what it should be doing it with, and split the 8000 line jobs definition file into smaller files”.

Adding some creepy stuff is not necessarily straightforward. Happily, that last paragraph describes what I did for the last major patch. 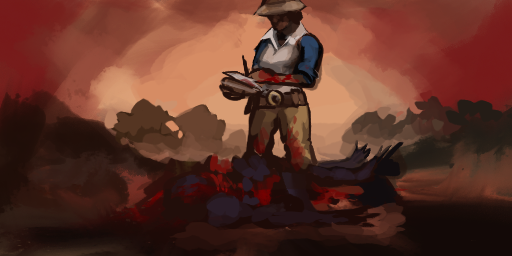 Posted in Clockwork Empires | Tagged #JustCultThings, as a company we have agreed to give up fishpeople for lent, Fishpeople have it tough, I mean it took six months for us to notice that Nicholas had transformed, indecent cult activities, now I've got "Weird Science" stuck in my head, refactoring thousands of lines of game content definitions is apparently "creepy stuff", the truth is inside that Fishperson, What is a Fishman? A miserable pile of fish.
5 Comments

Bureaucracy is of utmost importance to The Empire.

My name is Thaddeus Bronzewhistle and I was born in the 49th year of the reign of The Queen. I left civilization to promote the ideas and ethics of Science. I worship at the altar of celestial order, as is right and proper for a Subject of The Queen. My barber has commented that I am a fine specimen of my Class, with a stance neither above nor below my correct Station in life: The Middle Class.

I hold it not against the Creator that I have been placed thus in life, for my Station is the logical result of the Machinations of Fate. But were I born an Aristocrat I would be able to fully devote myself to the Noble Calling of Science, though I shall not indulge in thoughts which are against the Natural Order of the Universe for such thoughts lead to Madness, as well we all know from the terrible stories one may read in back pages of The Empire Times.

Posted in Clockwork Empires | Tagged as a company we have agreed to give up fishpeople for lent, bizarre literary experiments, classism, clockwork empires, don't drink the sulphur tonic, Fishpeople just want to be loved, How to make friends and influence fish-people, I've been drawing icons all week and we've really had enough of icons haven't we?, it was difficult to capture gifs of people fighting fishpeople because they kept stopping to butcher and eat them, one NCO got his pistol stuck in a fish-steak and was trying to fight fishpeople with it, some modder is going to replace our combat music with Yakity Sax and it'd totally work, this post was going to be about creating temporary items so characters could carry out visual flavour tasks without all kinds of ridiculous requirements but that was boring so fishpeople happened, wherein David plays with the gif tool
16 Comments