Launching a game! It’s a thing that happens – I, for one, am still recovering. (I went to the gym for the first time in three weeks today and it was awful. Please, just somebody put me out of my misery.)

We pushed a hotfix last week which fixes the following issues:

This hotfix for build 1.0B was *also* labelled build 1.0B, since it didn’t break your saves. We are now moving onto things that *do* break your saves, which means that we are going to push fixes to our experimental branch on Steam instead. (For those of you who don’t know how this works, we have an experimental branch on Steam where we push code for testing and feedback; you can opt into it on Steam by right clicking on Clockwork Empires, selecting properties, and picking “experimental” on the ‘Beta’ tab.)

Things that we have fixed so far (a not-complete list):

We will be rolling this to the experimental build in the next couple of days. Watch this space, our Steam news page, and our forums. For those of you not on our forums, please consider making an account; we’re very nice and there’s cake.

Moving forward, the plan this month is to have another stable patch (call it version 1.1) by the end of the month. This patch will be a mixture of bug fixes, UI/UX improvements, optimization, and some new content. For my part, I have a list of crash issues that I am sorting through as fast as I can; after that is taken care of, my focus will be on optimization, fixing various issues with flattening terrain, and then finishing these fellows: 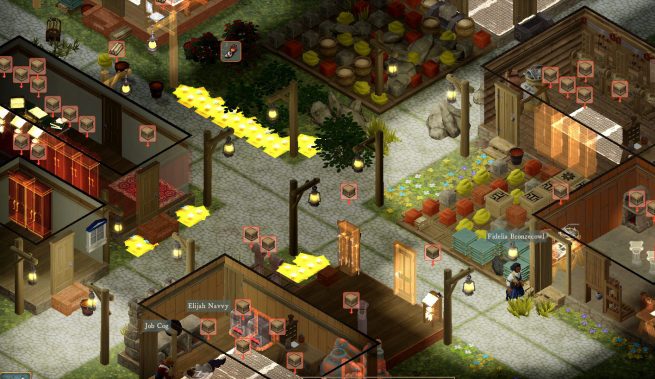 Yep, roads. It’s about time. Obviously the final product will not have those weird lines across them. I wanted to get these in very badly for 1.0 but I just didn’t have the ability to get the UI issues sorted out in time. I’m also hoping to get some love in for fences and gabions while I’m at it, so that people’s colonies may have Fences and be Colonial and Proper.

Another short-term priority is Steam Workshop support, and mod support in general. We’ve already received a bunch of smaller script fixes from Users Like You(TM), and people appear to be itching to do more.

We are also catching up on all the paperwork that didn’t get done last month. This is really not very exciting, but it’s a fact of running a company.

On an administrative note: we will probably not be doing weekly blog posts every Wednesday any more. This is due to a combination of being in a post-launch mode and not a pre-launch mode, that it’s really difficult blogging every week about bug fixes, and – frankly – we need to let the blisters on our fingers heal up after blogging every week for something like five years. We will keep you up to date in this space; it’s just that it will be intermittent moving forwards. We will continue to participate in the forums here, and as we have time elsewhere as well.

Again, thank you for your support! We hope you’re enjoying the game, and as always feel free to drop us a line if you have crashes, bug reports, suggestions, or just want to chat about The Baleful Eye.

Posted in Clockwork Empires | Tagged at least it wasn't a pink scorpion diggle, crash what crash, patch what patch, there isn't actually cake and this wasn't the tag you thought it was going to be, where we're going we don't need roads
7 Comments

7 Responses to “Well, That Happened!”