Having talked about one major system change last week in the form of upkeep, let’s talk about another one this week: immigration.

Ironically, it was almost exactly a year ago the last time we had a blog on immigration – my first blog post, in fact. Things have changed a lot since then – personally speaking, it’s amazing to think about how much the game has improved in a year’s time – and it’s about time for another look at how you gain characters over the course of the game.

Remember this? No? Good.

Currently (unless you’re on the experimental branch,) the immigration system is split into two parts. First was a simple trickle of a few random lower-class characters every two days, to help fill out work crews. The second was overseer immigration, which was based directly on the player’s “economic output” – a complex equation having to do with what players have created and how many times the item has been processed, etc.

These made sense for the game that was in place at the time we made the systems – we wanted to allow players to progress with the economy, as systems like event arcs, decor and building quality, and many others didn’t exist at the time. These methods gave us a fairly standard progression arc that all players would hit. (Though it had its share of timing and balance issues.)

At this point, however, the economy is starting to come into its own in interesting ways. Decor, Quality of Life, and Upkeep all play off commodity costs and – ideally – mean players have to make decisions about what to spend their resources on day-to-day. If we were to integrate immigration directly into the economy, rather than a passive benefit, we could increase the complexity of player choice – and make for more interesting colonies.

There’s another issue of note: housing has always, for better or worse, felt rather out-of-place. Players’ optimal path was generally to build a single huge bunkhouse and call it a day, since only beds mattered. While there are still elements of this to be resolved, bringing housing in as an element of immigration is a natural fit that also ties into the desire to bring immigration and economy together.

And so we have! Immigration, as of the most recent experimental build, is now based on your housing capacity. Specifically, each bunkhouse you build will allow you two additional lower-class characters, while each middle class house will allow you an additional overseer. This allows players to bring on characters at their own pace – and to prosper, or get in over their heads, due to their own actions. (Note that costs for house-building have been increased somewhat.) 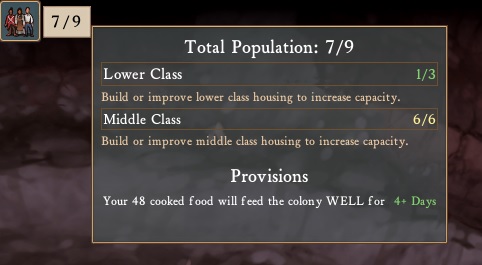 Note this doesn’t mean you’ll always receive the maximum number of characters every time an immigration wave comes. Immigrants are fickle, and come where and when they will. Rather, building houses increases your population cap, allowing you to fill your way up to maximum. Whether this averages slower or faster than the previous system will depend on your building habits.

It’s worth noting we don’t consider this the completely final version of this system. Daniel and I have done a bit of talking and think it might be fun to tie modules in here as well, allowing certain modules to increase the capacity of a house further (that way you don’t necessarily need a colony with 70 houses in it.) This will not be in the first implementation, but I’m pretty excited to give it a try and see how it works out. As always, let us know what you think after you’ve checked it out!

Posted in Clockwork Empires | Tagged a tie module is just a module made up of ties, contentious immigration issues, get your hot real estate tips from chris, immigration reform, is it too soon to start making a clexit joke, show me what you've got, the immigration debate, we demolished the ceramics workshop to make way for more condos
4 Comments