Quick, Put More Logistics In It!

As part of the workshop->upgrade->Snoot->cover the world in progress cycle, we have an exciting series of new economics problems: how to make upgraded modules actually useful, and how to make workshops not terrible. The solution that we have elected to try, and which Daniel bullied me into writing (which took a week, and then I quite like the results so it’s not so bad) is to have workshop jobs assigned per-module, rather than per-building. 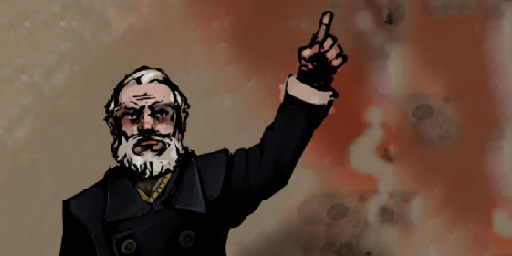 For Revision 50D, we let you explicitly assign a task to a given module (“Make Planks”, “Make Cot”, etc.) The # of workshop modules indicates the # of tasks. A worker will do the task assigned to the first module in a row. If the first module is busy, they will move to the second module; and so on, and so forth. Modules are organized in the workshop in terms of priority, and can be moved up and down (i.e. if your power saw is first in the queue, if it is empty people will try to use it first.) So if you have:

The order of execution will now always be:

This has three major consequences. First, more workers and more modules now become useful! Yay. Second, a number of issues have been fixed while doing this (most notably, standing orders for basic food; various people creating more outputs than the job actually indicates). Third, we can now make a power saw useful and guarantee that it will be used for the mass-production of planks. Also, there are less hidden behaviours and people being confused by how the workshops work and thinking that they’re not working, when in fact we’re just not signalling what is going on well to the player. 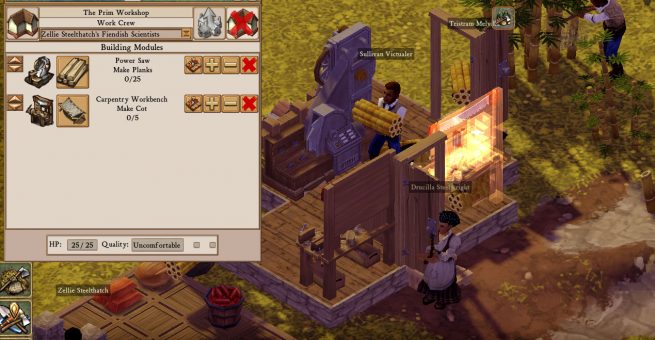 Or just look at this picture.

The second part of this, of course, is the ability to batch-process stuff. A power saw will now let you convert 5 logs into 5 planks. This in turn means we’re giving you the ability to pick up 5 logs at a time from a stack to fulfill a job, which has in turn meant that we have had to rewrite the pickup workshop commodity code to do this. So there’s a lot of excitement going on here, and it gives other people to do exciting and good things with the economy and gameplay balance that would not have been possible otherwise.

Posted in Clockwork Empires | Tagged an industrial logistics simulator for everyone, damn your snoots Vining, does anyone actually like the word "snoot"?, exciting colonial bureaucracy, exciting logistics, lord palmerstoke has all his best ideas in the bath, you can do anything you want in a carpentry workshop as long as it is make planks
5 Comments

5 Responses to “Quick, Put More Logistics In It!”