Modules! You know them. You love them. You use them to make lots of planks. (Just so we’re all clear, modules are the category of objects that are used by your colonists to do things in buildings: workbenches, beds, ovens, chairs, and even doors.)

Modules have been in a weird place for awhile. 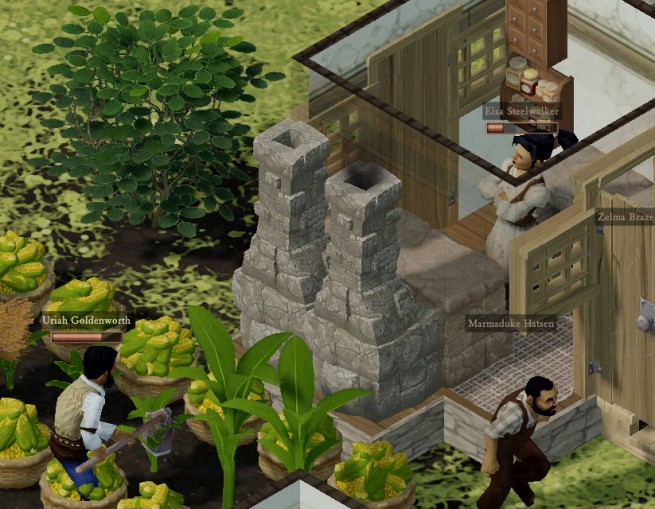 This kitchen is adorable. (From a savegame a player sent in.)

Specifically, modules don’t fit very well into the workshop economy. You can improve your workshops, but it doesn’t have much of an effect on the speed at which you can make new modules – this is governed by an obscure ‘construction’ skill that almost never sees enough use to get leveled.

At the same time, we were facing an issue with certain workshops such as the carpentry workshop; there just isn’t a lot for them to do. Set them to auto-produce planks and forget them, basically.

Lastly, there just weren’t a lot of ways for us, as game designers, to interact with modules. They’re either buildable or not. We want the ability to do things like give players modules that they couldn’t otherwise acquire.

Happily there’s an elegant – and fun! – solution to all of this. It’s a new system coming this month; Boxed modules! Essentially modules, themselves, as a commodity. Boxed modules will be produced by workshops and then “unboxed” when needed. 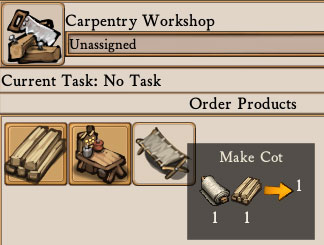 What?! I have to look at my carpentry workshop after the 5-minute mark now!?!?!

The process is as follows:

This will allow you to do things like produce beds in advance and then place them all at once, or (disclaimer: probably not in the first build) disassemble modules back into boxed versions to move them about.

This has the additional benefit of tying into your overall progression! Have a skilled carpenter? A real fancy iron smelter? These benefits will mean faster production of modules for you – and that very production will help skill your overseers up.

Lastly, we can use this system to enact Fun Stuff, granting modules via special conditions, like giving you a nice memorial plaque commemorating the time you got your entire military killed in a single battle. And hmm, what’s in that odd crate those Obeliskians dropped off…?

It’s going to be an exciting time!

Posted in Clockwork Empires | Tagged gløg, just put the Blømquist in the corner by the Tørngaard, this is what we got in lieu of a partnership with a certain Swedish furniture manufacturer that only does tie-ins with certain other prominent games in the simulation genre, try the meatballs!, we find flat-pack furniture very exciting and hope you do as well
9 Comments