The first part is called “the pledge.” The blog author, working on behalf of the programming department, asks you to see a perfectly ordinary game. It has some quirks; it has some issues. Some of these issues are things that we are cleaning up this month as part of ongoing patch-work. In particular, I have spent most of this week so far adding the ability for buildings and modules to be removed and destroyed, and for zones to be removed and destroyed. (As part of this, farms are going to have a set up menu similar to those for buildings.)

The second part is called “the turn.” In this part of the blogpost, we mention that we finally figured out what’s going on with the Mac build and why it was throwing Lua errors all the time. This has been fixed, and will be pushed to the experimental build for further testing, once the next experimental revision goes up. We will also quickly note that Linux support is coming along as well – we are now mainly waiting on the additional work to get it building over here and not just on Ryan’s machine, but I think we now have all the pieces. Again, we’re sorry this is taking so long, for those of you on alternate operating systems.

The third part of the blog post is called the Prestige Menu. 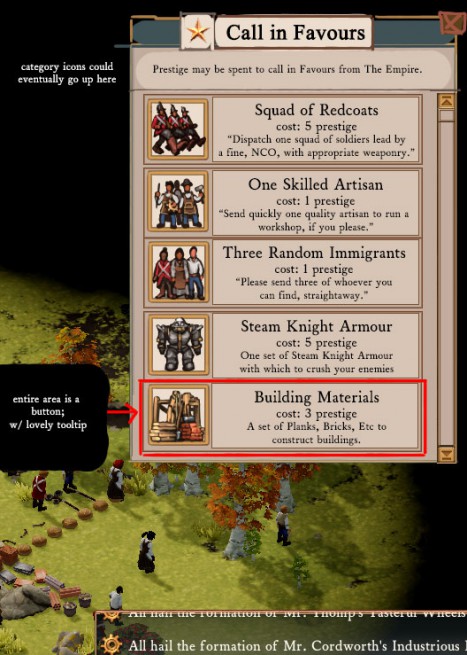 Concept art, from David, for the Prestige Menu. Text and contents of Prestige Menu will be different in final product. We will now drown one programmer in a water tank.

It is possible in the current game to end up blocked in a couple of ways. You may be out of overseers or artisans and unable to proceed with your colony without more labour; conversely, you may also be out of materials and you may not be able to manufacture them without waiting a lot (and burning up your food resources, and so on and so forth.) There are two proposed mechanisms we are working on to deal with these issues: Trade and The Prestige Menu. As this blog post is not called “the Trade”, which has positively Faustian undertones*, we will simply talk about the prestige menu today (also we’re not working on Trade yet.)

In the current game, various events will give you prestige (immigration, aristocrats arriving, etc.) As you gain prestige, you may wish to spend it to deal with things blocking your colony from being productive (insufficient immigration, insufficient manpower, a sudden need for some of the Usual Scum to man your work crews.) You can think of it as an additional currency system, or possibly akin to “Miracles” in a so-called God game. Certain things on the Prestige menu will likely require certain things in your colony to be constructed before they can be unlocked. There is also, of course, the possibility that you may be able to get Other Forms of Prestige (but enough about that, let’s say…)

How about we take a moment to expand not-so-briefly upon the point of Prestige?

There’s a potential pitfall and a potential gain here. First, the pitfall would be that generic currency could make the economic game generic, choiceless, and therefore uninteresting. As in, just earn lots of points somehow and solve any problems magically. We’re going to have to carefully avoid this as we iterate the design. It may turn out that almost all of the economic effects should just be shoveled into the Trade system.

What we could gain is related: if we give players a way to generate this generic currency that can fill gaps in production lines, this should theoretically allow them to specialize their colony in one or a few areas which may not even relate to generating commodities at all. Maybe farming and metalworking is your passion and you make a ton of products. Great! But if it’s not, Prestige would be able to flesh out the somewhat more abstract “successes” that don’t involve shoving commodities in and out of machines.

Maybe you’re a player who just loves making really nice houses for rich people who will then be really happy about all their nice stuff – this should be a legitimate colonial niche that would allow a player to “purchase” what their limited industry (and Trade) might not be able to fulfill. Likewise, natural & archaeological scientific discoveries could provide Prestige to an exploration-focused player. Likewise, fighting battles.

This has nothing to do with the blogpost, just a rejected shot from the screenshot pile for the last update. But, uh. You could imagine that shooting those bandits would earn your colony some prestige, right? Right.

Anyhow, that’s where we are this week. Oh, and unpacking the new offices, which are very nice even if the sun is extremely bright now that we have windows and can see the sky for the first time since we started making video games.

We also miss the pigeon.

Posted in Clockwork Empires | Tagged but is this a good blogpost, expansion pack confirmed: Faust & Partner Trading Company, look morty if this is a stupid ui mockup then the prestige movie is a stupid movie okay, Nicholas continues to fire shots in an attempt to kick off a hip-hop style feud with peter molyneux, please don't ask about the holiday christmas party, water hasnt been delivered to the new office for a week so weve been forced to tap into the strategic tequila reserve, we just need to get David Bowie involved somehow and it'll sell itself, where does nicholas keep finding these old ui mockups?
10 Comments

10 Responses to “The Prestige (Menu)”