Keep Our Troops At The Front Firing!

In other words: Ammunition. (Because we know that everyone loves counting bullets.)

But no, it isn’t about counting bullets and shouldn’t be. Let’s back up the discussion a step and deal with –

Let’s state the working assumptions of the system before getting into how to build upon it.

We have combat in Clockwork Empires. A player’s soldiers combat effectiveness is determined pretty much entirely by your soldiers morale and their ability to output damage.

Damage output is based on weapons (which don’t have a lot of variation right now and aren’t controlled by the player anyway) and on positioning/density of troops vs. enemies (which is determined mostly by procedural circumstances, though the player has some control over terrain via gabion construction and positioning via use of rally points).

Morale is determined by how upset people are and can be controlled by not getting people killed, having good cooked food available, booze, having nice houses with beds to sleep in, and letting people make friends (idle time). Although if people are the least bit upset, they’ll get recruited into a cult rather than just making friends, so that last bit can be troublesome.

Let’s make a visualization of this because I like pictures. 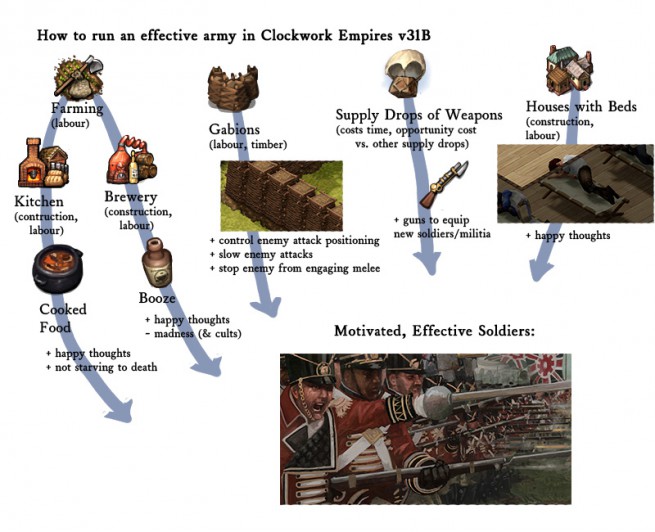 Hey, this is fun!

But wait, we could make this more interesting! There is, I hear, more to life than growing cabbage in your dirt-fort and swilling some beer before sleeping in a miserable cot. Plus most of this is automatic once the player sets up the farms and buildings. We want the player to be able to make some more interesting decisions as well as provoke them to move higher into the advanced buildings like, oh, how about the the Refinery/Metalworks/Arsenal line? That’d be nice. It wouldn’t hurt to introduce the possibilities of harrowing peril while we’re at it, either. Now how do we do that?

(It’s not that simple but it was straightforward because all the infrastructure to script this exists; this required introducing the notion of commodities holding amounts of a content, a job to take a requested amount of content from a commodity and all the possible cases there; generating commodities with a given amount when a soldier dies and discovering that all ints get turned into strings when this particular data structure is passed through the C++ layer for perfectly good reasons which I knew nothing about until I reported this ‘bug’ after all the work of tracking it down, etc. All told, as far as fairly sweeping new features go, it was a breeze.)

Ammunition requirements, player, (in which game objects are underlined)

From the player’s perspective, creating a Crate of Ammunition at an Arsenal costs Barrel of Gunpowder and Brass Ingots. Easy! Wait – how do you make those?

Barrel of Gunpowder requires Sulphur and Coal (or Charcoal) to be combined at a Chemists Workshop. Sulphur must be mined. Coal must be mined from the ground. Charcoal can be produced in a Charcoal Kiln at a Refinery from Timber from chopped down Trees.

Still with me? I think it’s time for a picture. 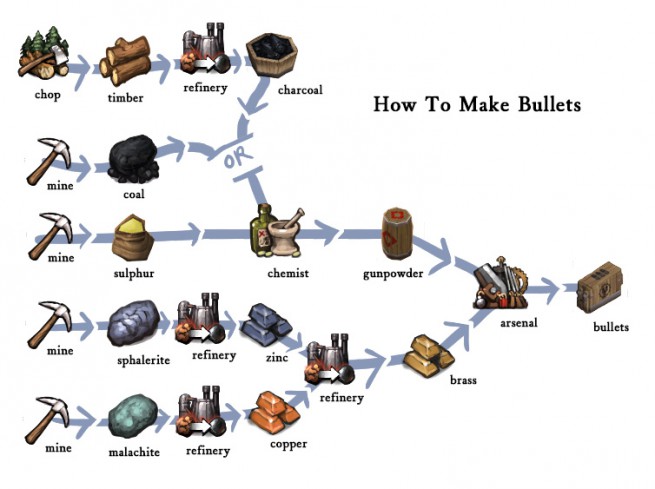 I love these charts. I really do. (No one else does.)

There’s a lot going on there, and it’ll force the player to dig into the complex production chains and go out exploring the map to find ore, inevitably stumbling into trouble. It’s going to be Fun! (We’ll probably do well to have the Arsenal produce gunpowder rather than the Chemist, but it might be fun for players to discover that the Chemist can make Laudanum, Sulphur Tonic, and Sulphur Fertiliser …)

Ammunition introduces another indirect element to combat effectiveness (vs. the direct element of “needing bullets to shoot at all”): simply have bullets remaining weight the utility of a soldier decide to fight vs. flee. From here, we get poorly-equipped soldiers who are running low on ammo being more likely to run from battle (unless, say, they possess the trait “Foolishly Brave” in which case they may fight it out with bayonet). This ties ammo back into the character system, and it rewards players who have effectively supplied their soldiers. Excellent.

Oh yes, landmines: this was mentioned it last week. Their effect is essentially to make placement of gabions aka manipulation of enemy movement really interesting. Landmines are a bit expensive – probably not even a good deal right now, which’ll require gameplay balancing – so you want to put them exactly where you think they’ll do some good such as between gaps in your gabion wall.

I just realized, considering the expense of landmines vs. their effect which only sometimes kills the enemy, they should really ought to have a huge morale effect on any enemy who witnesses a landmine detonation. The terror of the weapon is partly in how you have no idea where they might be. Um. Just a sec, making a note to add this …

What’s This All On About

We’re implementing the plans laid long ago. In creating these systems, the implementation itself suggests new mechanics that arise from the interacting mechanics. It’s really neat, and it’ll just get more interesting as we add new pieces to the mix.

Posted in Clockwork Empires | Tagged but where do hats enter into this, combat, exciting logistics, fan suggested title: "Cry Havoc and let Slip the Cogs of War"; rejected by the Committee for Restraint of Steampunk Excesses (Cogwhizzling Especially)., it has been determined that landmines are not in fact "fun", would you like to plan your Ukrainian Grain Silos? David can make a diagram to assist you, you have to buy all four episodes to get the lightning gun
33 Comments

33 Responses to “Keep Our Troops At The Front Firing!”