First, let’s do the big announcement:

We’re thrilled to announce that we will be releasing Clockwork Empires on Steam Early Access on August 15th for $29.99!

The “Earliest Access” process has been extremely successful, and we couldn’t have done it without all of those fine players who have helped us out by participating. People are sending us horrifying/exciting bug reports every day and are making useful design suggestions; in short, it’s everything we wanted to get out of our “Earliest Access” and as a result of these weeks of intensive effort by both players and our development team, we will be moving Clockwork Empires into the larger spotlight with a much improved, more polished experience.

Thank you, Earliest Access players – we couldn’t have done it without you! 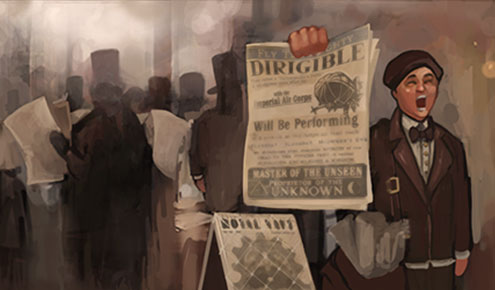 And with that said, there is going to be lots to do in the next two weeks.

The last two weeks have been crazy.  It’s a weird experience bringing a project three years in the making to a state where random people start reading your scripting comments.  It’s been incredibly rewarding to see people having such a good time and being so enthusiastic about providing feedback.  While we haven’t responded to everything, we’re doing out best and we’ve definitely been reading everything anyone says, and it has been really helpful in deciding how to prioritize developments appropriately. Our perspective is so close to the game that although we have a Giant List, we do not know as well as a new player how the game experience will be impacted by one feature versus another — hearing about what is unclear to a new player upon first launching the game is actually a terrifically helpful piece of feedback.

The Earliest Access process is going phenomenally well, and we couldn’t have done it without everyone who wanted to be a part of it. So again, all of us here at Gaslamp Games would like to thank you.

We’ve filed almost 250 bug reports in the last two weeks and resolved almost 150 of those. Bugs have ranged from dead characters coming back to life to have conversations about communism (this keeps happening), to a plethora of invisible buildings and nasty, unpleasant crashes (which we are slowly but surely stamping out). There’s also a small issue where colonists only sleep once in their lives (but this might just be Nicholas). We have also had a lot of rather usual, but less player-facing bugs fixed this week that involve (exciting!) memory management and serialization.

Many players have requested better stockpile support, which was on our list prior to Earliest Access; we have bumped this up in priority due to how often it has been requested, and some of this work can be found in the latest update (Revision 28). Filters and a stockpile viewing panel will be added in the next build (Revision 29)

We’ve also resolved some issues with hardware that we weren’t able to test without your help: some videocards have issues with terrain appearing pitch-black (as it does) and these issues have been resolved. We are still working on Intel chipset support, specifically related to the dire Intel HD4000. There’s still some other really Fun stuff going on with the Intel chipsets that we want to support, specifically related to laptop manufacturers not allowing people to update to the latest drivers, which we need.  We’re hard at work on it though; thanks for letting us know!

(Alongside all the bug-fixing, tech, and UI improvements there’s also some Fun Stuff that we want to sneak in to the game but can’t, of course, tell you about. Rest assured that your Fun is always a priority at Gaslamp Games.)

We’re halfway through Earliest Access now and we’ve got two weeks to go and we’re going to make them count. 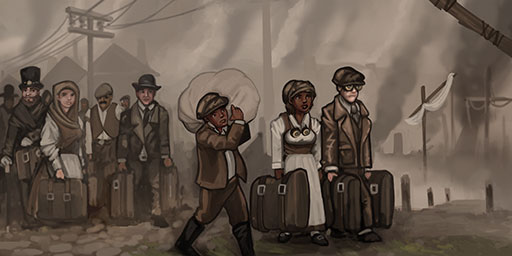 Eager players line up to “Join The Colonies”.

Posted in Clockwork Empires | Tagged all hail the giant list, all loyal subjects of the empire arriving at the colonies will receive one (1) pair of steampunk goggles with unnecessary coggling, better an invisible building than a squalid one, Communism will never die so long as the contradictions of capitalist exploitation something something spectre haunting Europe, does this mean we are in earlier access now?, Exciting Memory Management!, please check under your chairs for Fun, saving games is the height of man's folly and arrogance, Some civilian reporters got in among the earliest access players today and Daniel felt compelled to have them nerve-stapled, the tin of corned aurochs beef is an impossible object and no good can come of trying to make it
16 Comments

16 Responses to “Clockwork Empires is coming to Steam Early Access”