All posts tagged with "the founding of new sogwood"

Daniel and I love arguing with each other about random design questions though somehow we generally end up agreeing on what to do, without agreeing on a conclusion to the original question. The result is, at least, a practical course of action. This is the story of an argument where I concede victory to Daniel. 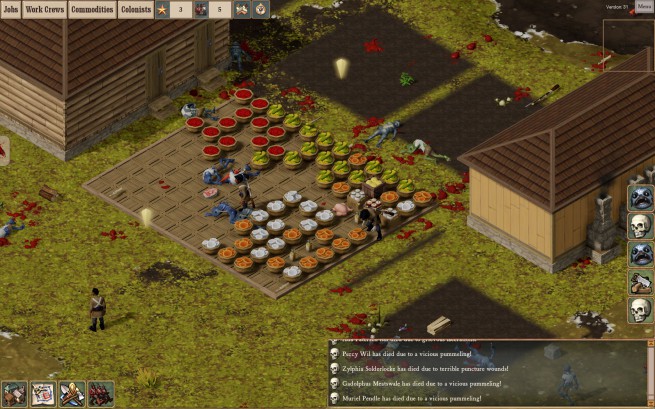 This colony was barely holding together, the only survivors are a pack of utterly depressed militia soldiers. They have only a stockpile full of raw food, their guns, and some whisky. … then thirty Fishpeople raiders attacked and it was all over.

Playing the latest build in the tropical biome, you may find that it is indeed crawling with random Fishpeople. When playing I found I had to send troops from one side of my colony to deal with a fishperson, then order them to run to the other side to deal with another one. Meanwhile, a third fishperson is trying to mess up my crops and, jeez, to re-select the military rally point I have to open Work Crews, scroll to the military squad (defaults to the bottom of the list), find the little rally button, then drop it off on the map each time I want to move the squad rally point. Tedious! Let’s break down the issues here:

Posted in Clockwork Empires | Tagged "New Sogwood" is a terrible name, basically a lot of code is being written to shout "allo allo allo" at things, Fishpeople, fixing the curry recipe was my top priority, for the last time the fishguns don't use gunpowder, I am ridiculously happy that stumps can now be cleared, the founding of new sogwood, Troy needs to study up on his Shen-Ji Yang (but we still love him), What do axe murderers talk about anyway? Oh I chopped a fellow up right good not two minutes ago and how are you?
10 Comments