A Simple Pint At The Pub

This post was originally going to be about Occult Inspectors but if we gave anything away that’d ruin the fun, wouldn’t it. So why not come down to the pub for a pint? By which I mean, we’ve been doing some iteration of the Public House (and related buildings, and games systems) and, while the trajectory we’ve set upon ourselves here is not yet finished, some interesting bits of design have come up on the path thus far traveled. By which I mean I’ll ramble about random stuff vaguely related to implementing Pub features which may or may not change.

Let’s start with the UI for the Pub, because this has implications through the entire game: 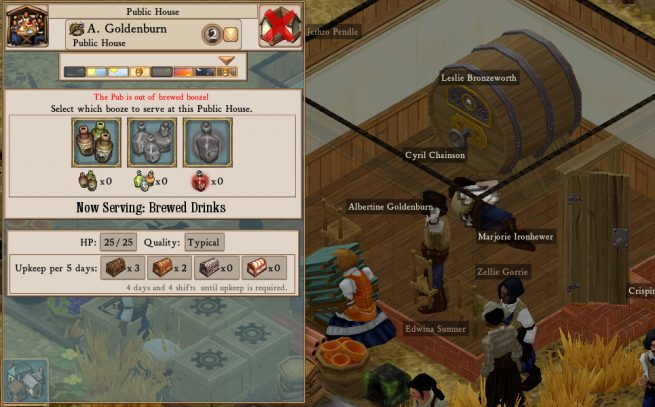 Posted in Clockwork Empires | Tagged a proper cuppa, behold the glory of the booze vats, bottom, drink more booze, remember that pub which was just full of people holding axes? good times, the booze vat must contain some combination of kerosene artificial sweeteners and scumm
5 Comments