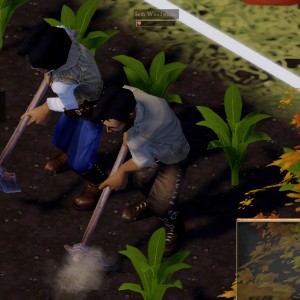 Down On The Farm

Lots of good stuff is wandering through the game this week as we finish a bunch more systems and lurch towards The Great Content-ing:

– Immigration is in – bands of migrants will arrive, ranging from people for your work crews to upper class capitalists and the wretched Aristocracy. (Not implemented yet: the jolly Population Dispersal Zeppelin.) This is implemented handily via our newly-finished event system from a few weeks back; other random events that can happen at present are wretched Novyrus peddlers and Invasions From The Deep.

– Various screens are being implemented, and David is sending them back to me with lots of jolly comments about how terrible they look.

– On the technical front, good progress is being made on the loading and saving front, using a plaintext save-file format (actually, more XML) which will hopefully alleviate some of the problems with the binary approach we used with Dredmor.

But what I actually want to talk to you about today is farming. Inspired by the fact that our citizens have had nothing to eat but berries and the occasional hunk of meat scavenged off of an auroch for the past eight months, we decided to implement farming this week.

Posted in Clockwork Empires | Tagged clockwork empires, exciting farming simulation, farming is super exciting, Farming Simulator 1883, forgot to have eggs modeled so suggested we use hand grenade as placeholder, I sure enjoyed //cropping// the images for this post har har, it always comes back to the Novyrus with some people, it's a tea made from opium pods, meanwhile back at the ranch, not gluten free, not pictured: the Danger Zone, our research into historically accurate opium harvesting methods has probably put us on some kind of list, steampunk farming, tanking our content rating due to depication of historically accurate drug use, we take sauerkraut very seriously and so should you, you can grow opium in Harvest Moon?, you have to put a cog on the wheat
17 Comments