I took a vacation last week. It was really, really weird. So here is a list of things we are working on this week around the office:

This is what happens when Nicholas takes a vacation.

This is not part of the list, but isn’t it cool?

Afflictions. Previously, we have a notion of “you get shot a bunch, you die.” This does not really convey the interesting damage model we were after. At the same time, we do not wish to start modelling individual colonist teeth like certain other games we know. The solution is afflictions, which I suspect has been inspired by our in-office game of Dominions 4. As units are damaged, they may receive afflictions. These afflictions may affect characters by giving them (currently) an equivalent to negative traits.

How do we fix these? Well, for now you don’t have a Physician or Doctor, so the local barber is what you’ve got. Or not so much what you’ve got, but, rather, the first stage of The Plan.

Job System. One of the mysterious issues in revision 32A is the problem that people sometimes seem to stop working. So, there are several causes for this:

So, as always, the problem was a mysterious mixture of bugs, features, and missing UI. Top people are working on it.

Something else that we have been discussing, but haven’t really figured out how to tackle yet: the problem where people queue up 300 assignments and expect the game to do them in some sort of reasonable order. At present, work crews do assignments based on their “utility” as calculated per job per colonist – which is possibly problematic if you have everybody mining surface nodes due to considerations such as “we are really close to surface nodes and have an irrational love of rocks”, and not farming due to considerations such as “those farms are really far away and I’m tired.” You can’t eat hematite, fools!* This suggests that you should have a way to prioritize assignments, and that the priority of assignments, all else being equal, should be first-in, first-out ordering, with the possibility of adjustments. I’m tinkering with this, and we’ll see what sticks.

Economy. Again. In the same line of thought, we are enhancing workshops so that they can now attempt to maintain stockpiles of certain processed goods. The plan is that workshop jobs will now be either “one-off jobs” (Make 30 planks) or standing order jobs (“ensure supplies of planks never fall below 30”) and can be processed in the order they are displayed in the workshop. If you have “Maintain stores of 30 pickled black fungus” before “Make 20 pies”, for instance, people will attempt to bring the number of pickled black funguses to 30 before making 20 pies. (If they can’t, they’ll go ahead and will make the pies, until they run out of pie-making material; once this happens, they’ll start evaluating the list of workshop orders from the top again.)

The Church. In order to combat the menacing problem of Cults in our modern society, the Church is now open for business. The building itself is in and may be charmingly decorated, and we are working on Exciting Vicars. 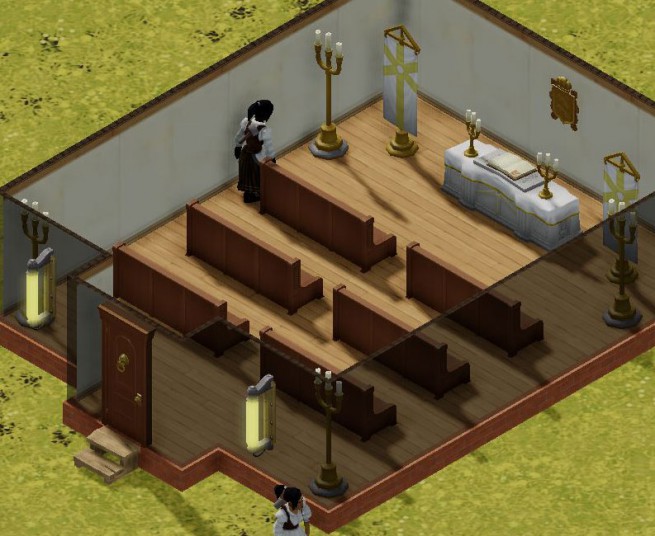 Are you an upstanding Mechanist or are you one of those Scoffcogs causing trouble with your counter-revolving theories?

Posted in Clockwork Empires | Tagged a shave and a brain splint please, division of labour, explosions, I don't want to play with Delta children, in clockwork empires opium is actually the opiate of the masses, incidentally the lower class has been made grubbier, silicoids, the gif of david's screaming head was omitted because it really just doesn't make sense, the land dragon did it, vacation what vacation, we learned everything we need to know about religion from Dominions 4
17 Comments