EDIT: A quick note to the above – we are still testing save games this weekend, with an eye to getting the last few bugs out. If you would like to try them, please switch your Steam build to the experimental branch – the version number should be “30B” – and let us know how it goes. We’ll let you know when the official release goes out here, and via e-mail if you are on our mailing lists. Sorry for the delay – hunting mysterious crash bugs and fixing things is time consuming business. — Nicholas

I think it’s always a miracle when a video game actually gets released, in any form. It’s also a very weird feeling having three years of work launched, for a product that is not complete yet – but there it is, we are in Early Access. The trick now, of course, is to get Clockwork Empires out of Early Access – and that is what we will be focusing on next.

With regards to Earliest Access: it very much appears to have been the right decision. We launched on Steam in a pretty good state and ended up with only a few issues that we were unaware of. We have seen some excellent streams of Clockwork Empires appearing on Twitch and people have put up some wonderful YouTube videos that invariably end with everybody being eaten. It is also nice to do an early access launch for the simple fact that it had none of the Sheer Terror! that accompanied the launch of Dungeons of Dredmor, or any of our expansion packs. I would highly recommend Earliest Access as a thing for people considering Early Access to do: in terms of our primary goal of having the smoothest launch possible into Early Access, it seems to have worked perfectly. Many of the improvements we put in the game between Earliest Access and Early Access are a result of the diligent feedback of players and their willingness to criticize/talk about their experiences. As always, we thank you for your support.

Similarly we’re now seeing some excellent suggestions through Early Access on our Steam forums, which we are currently working our way through.

With that said, how do we get OUT of Early Access? The plan going forward is as follows.

Monthly Updates: Major updates will be released to the public version of the game once per month. They will generally be structured around doing whatever set of features we think we should do that month, in addition to containing the usual assortment of bugfixes, UI improvements, and optimizations. In other words, the monthly updates will be new, working chunks of game that fit into and enhance the previously existing game.

Experimental Branch: There will be an “experimental”  branch on Steam for players to test new stuff in which we will update on a fairly regular basis (once a week-ish, but not on any fixed schedule). The experimental branch updates will be tested somewhat in the office, but are not guaranteed to be totally stable. While weekly builds were great during Earliest Access, the testing overhead to ensure as much stability as was possible lowered the amount of direct development work we could do in a week. We’re going to cut back on the weekly testing so we can add content more quickly.

Players can opt-in to the experimental branch via the Properties > Betas tab in Steam.

An Extra Special Update: Lastly, and this is a specific exception for this week, we are preparing an extra special update for this week only that will enable the save/load game feature for everyone this week (barring some kind of unexplainable horror). We also seem to have fixed the issue that people were having with Unicode user names, eg. using non-standard English characters like umlauts and elder signs, on their computers, and that fix will be in this update as well. Many thanks to Micah and Ryan for taking point on these two issues in particular. Most of the remaining issues with save/load  involve some small stuff not being saved correctly – job icons, for instance, which use a totally different rendering system than anything else in the game, or all the little fussy blueprint things in the building creator which are just a total pain in the neck. 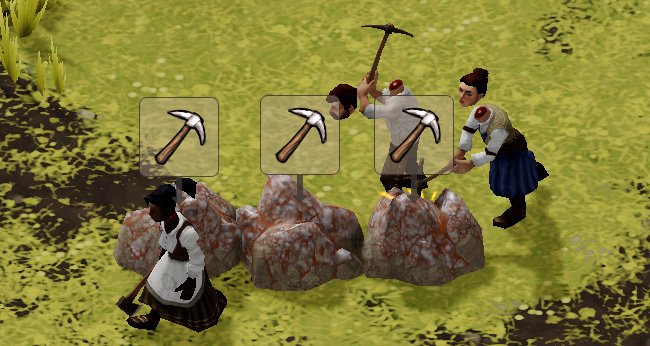 An example of an improperly loaded savegame. As noted, saves can be “a pain in the neck”.

We’ll be spending the next month working on some core systems, and that work will trickle into the test branch as it is completed. It’s going to be Fun.

Look for the next Major Update to Clockwork Empires in mid-September!

Posted in Clockwork Empires | Tagged an important heads up on forthcoming updates, having a good head on your shoulders isn't as important as you'd think, how to get ahead in the colonies, it doesn't matter that your head is floating a good three feet from your neck-stump so long as the mining gets done, it is possible that the sheer terror of a standard game launch has only been replaced with a newer and more insidious creeping feeling of horror, levitating heads (here's hoping this tag gets lots of use), patch what patch, poor fishpeople can't catch a break, the word pastoral probably doesn't mean what you think it means, unexplainable horrors, Zinc: the tawdry viscount of The Metal Kingdom
15 Comments